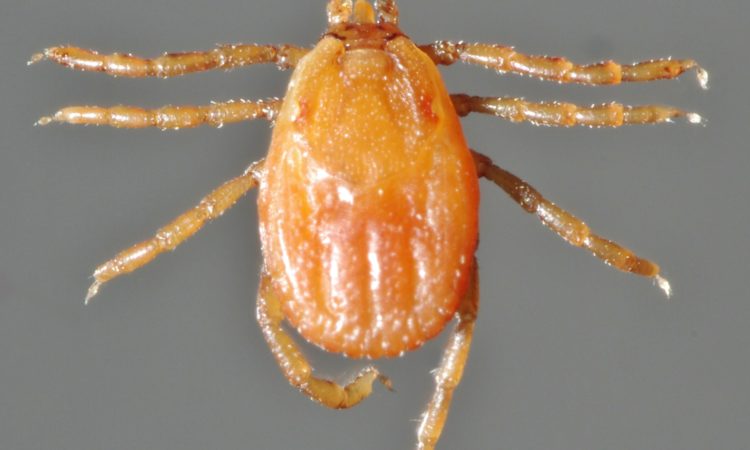 Want to hear a terrifying fact? In order to extract enough blood to survive, ticks can attach themselves to the skin of their host for up to a week. In addition, the most dangerous consequences of a tick bite could take even longer to surface, as Lyme disease, which is caused by the Borrelia bacterium present in tick saliva, can cause debilitating symptoms months and even years after the initial infection. So, it’s clear that ticks’ bacteria can cause harm to humans–but humans have a microbiota of their own–could any microorganisms present in our blood or skin harm ticks? The Chou group in UCSF recently discovered an enzyme present in tick saliva that may be able to shield the parasites from bacteria found in the human skin.

The Chou group had previously discovered that ticks had acquired a bacterial enzyme, type VI secretion amidase effector (Tae2 for short), through the horizontal transfer of its gene. Horizontal gene transfer is the acquisition of genetic material through a mechanism that isn’t the typical transfer of genes from parents to offspring and occurs frequently between different strains of bacteria. It would be as if ia friend gave you a piece of their DNA and you acquired a trait you didn’t inherit from your parents. This phenomenon is very rare between organisms of different kingdoms though, so Bayes and her co-workers hypothesized that the tick version of this enzyme, domesticated amidase effector 2 (Dae2 for short), plays an important role for the survival of these insects.

In order to determine Dae2’s function, it can be valuable to compare it to its bacterial counterpart, Tae2, which shields the microorganisms that express it from Gram-negative bacteria by breaking down specific peptidoglycan molecules present in their cell wall [Figure 1]. A structure of Tae2 was resolved by X-ray crystallography and compared to a computational model of Dae2, which is important because structure informs researchers how the protein is likely shaped and how it might function. This structural comparison revealed that the catalytic channel (where the reaction takes place in the enzyme) diverges significantly, notably that of Dae2 appears to be splayed more open than that of Tae2. This suggests that a wider variety of molecules could fit into this pocket and be cut by Dae2, making this enzyme less specific. If this is confusing, imagine that you were trying to fit objects into a box, a larger box would be considered less specific because it could fit a larger variety of objects inside it. Hayes et al. hypothesized that decreased specificity by Dae2 might allow it to break down different variations of peptidoglycans and thus protect ticks from a wider range of bacteria. To prove this, Tae2 and Dae2 were tested for their in vitro ability to break down peptidoglycans from different species of bacteria. While Tae2 was only able to break down peptidoglycans from gram-negative bacteria, Dae2 was able to break down that of several different species including gram-positive bacteria.

Dae2 is highly expressed in tick saliva, so in order to test whether its anti-microbial properties aid ticks during a bloodmeal, in vivo experiments were performed by feeding ticks on mice. A technique called interference RNA was used to inhibit the expression of Dae2 in half of the ticks, and an antibody against Dae2 was injected in half of the mice to inhibit Dae2 that was already present in the ticks prior the  treatment. This meant that half the ticks had Dae2 and the other half didn’t, allowing the researchers to compare the two groups. After feeding from the mice for three days, the ticks were detached and the effect of knocking out Dae2 was determined by measuring levels of skin bacteria inside the ticks through quantitative PCR and assessing their health through their weight and body measurements [Figure 2]. Ticks without Dae2 expressed higher levels of skin bacteria, weighed less and had a shorter length to width ratio, which indicate that the ticks were less healthy due to higher levels of the skin bacteria. Overall this experiment showed that Dae2 plays an essential role in maintaining tick health during their bloodmeals by protecting them against skin pathogens.

Let’s recap, in order to be able to feed from mammal blood for prolonged periods of time, ticks acquired a bacterial enzyme capable of killing gram-negative bacteria and adapted it to be able to harm gram-positive bacteria which are present in the skin of mammals. It shows that organisms are inseparable from their microbiota and thus when animals clash with each other they must also evolve to be able to tolerate their associated microorganisms. It may be terrifying—but also fascinating—to find out what other unique enzymes might exist in the saliva of other human parasites.