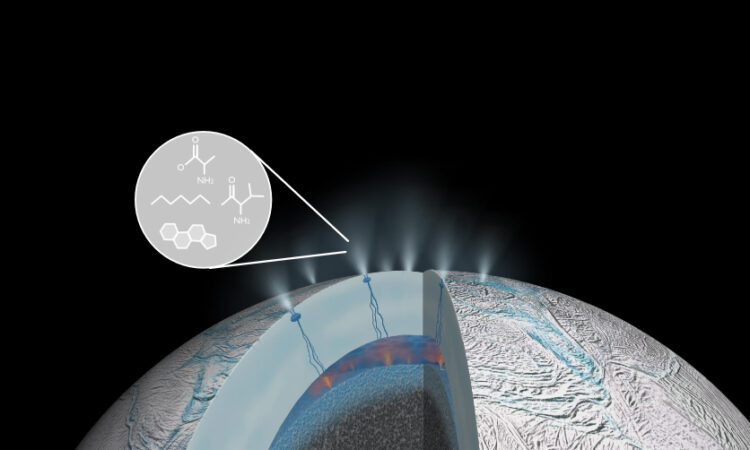 Enceladus is one of the most promising destinations in the search for extraterrestrial life within our Solar System. It’s a small moon of Saturn completely covered in a thick layer of ice, making it one of the most reflective objects in the night sky. Despite being almost a billion miles from the Sun, liquid water sits beneath the ice. The water is kept warm by frictional tidal forces imposed by Saturn’s gravity as Enceladus orbits the giant planet. Ice and water vapor are occasionally ejected from the subsurface into massive plumes that extend 500 km over the moon’s surface. This ice/vapor mixture is the ideal sample for testing whether life exists in the subsurface of Enceladus because you don’t need to land a probe to study it. In fact, NASA is designing probes to fly through these plumes and measure their organic molecules as evidence for extraterrestrial life. However, this probe may be moving at 0.5-3 km/s to stay in orbit around Enceladus. For reference, this is up to 10-times faster than a commercial airplane. At such high velocities, how well can we collect ice from these plumes without destroying the organics inside it? This is the question posed by authors of a recent paper in Proceedings of the National Academy of Sciences.

To test this idea, New et al. used a light gas gun to fire ice particles spiked with fluorescent organics at capture surfaces (CS) made of gold, aluminum, and indium. They used a microscope to measure the amount of fluorescence left on the CSs and quantified the “capture efficiency” of each material. They changed the size (1 – 30 µm) of the particles and their velocity (0.8 – 3.0 km/s) to mimic the speed of the probe and conditions at Enceladus.

Capture efficiency showed trends with velocity, particle size and capture surface composition. As shown in Figure 1, for particles < 10 µm in diameter, the gold had very little capture efficiency. Indium seemed the most effective at lower velocities and aluminum worked best at ~2.2 km/s. Both indium and aluminum had maximum average capture efficiencies of ~17%. In other words, 17% of the organics that hit these surfaces in an Enceladus ice plume would be captured. Although plumes can eject up to 1000 kg of ice per second, one transit of the probe across the plume will only intersect enough ice to make a small fraction of a drop of water. With a 17% organic capture efficiency and an estimated 1 nM of organics in the ice, the probe could capture enough organic molecules to measure with cutting-edge instruments. However, New et al. discovered that organic yield may be better in lower orbits of Enceladus where ice particles are thought to be larger. While the capture efficiency is lower for large particles (Figure 2), they generate 30-times more liquid for analysis. Thus, placing the instrument closer to Enceladus’s surface gives us the best chance of detecting life.

Enceladus’s massive plumes directly sample the water beneath the moon’s surface that may be hosting extraterrestrial life. In this study, the authors provide experimental evidence that we can indeed detect the organic signatures of life by flying through these plumes. It will then be up to the scientific community to debate and decide whether the detected molecules are definitive signs of life.