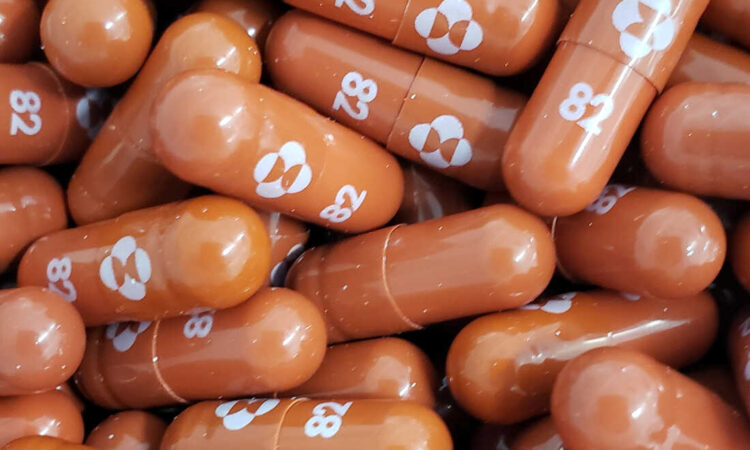 This week, a panel advising the FDA recommended to authorize the emergency use of molnupiravir to treat COVID-19, meaning that it will likely become the first authorized antiviral pill to treat the disease1. The drug was demonstrated to lower the risk of hospitalization or death by 30% in phase III clinical trials, which would make it a valuable tool for combating the pandemic if it becomes widely available. As was demonstrated by the slow roll-out of the vaccines in certain parts of the world, supply issues can hinder access to treatments for those need it, so developing efficient manufacturing methods to produce drugs is imperative. In this paper, McIntosh et al. establish a shortened synthetic route for molnupiravir that includes a novel biocatalytic cascade featuring engineered enzymes.

To synthesize molnupiravir, three chemical transformations are required: (i) the primary alcohol needs to be acylated, (ii) a nucleobase, such as uracil, must be attached to the 1’ carbon, and (iii) the nucleobase has to be modified to install an oxime group [Figure 2]. Carrying out the acylation reaction first simplifies the route as it needs to occur in an organic solvent, and the intermediates generated by the other transformations are not soluble under these conditions. Thus, the first step of the synthetic route was to acylate the primary alcohol of ribose to generate compound (1) by adding two equivalents of isobutyric anhydride in acetone.

Next, a nucleobase needs to be attached to the carbon at the 1’ position. To carry this out, a phosphate group needed to be added to the alcohol in the 1’ position to make it reactive and amenable to further modifications. The authors of the paper decided to use a biocatalytic approach to carry out this step in the synthesis, so they needed to find a kinase that would be able to insert a phosphate group to compound (1), and a nucleoside phosphorylase that would insert uracil in that position. To find such enzymes, they screened recombinant libraries of kinases and nucleoside phosphorylases for their ability to carry out each reaction. They identified a bacterial kinase that usually phosphorylates a methionine-ribose that effective for the former reaction and an E. Coli uridine phosphorylase that could carry out the latter.

To improve the efficiency of both reactions, they conducted directed evolution campaigns to make modifications to both enzymes. Directed evolution is a method used to make modifications on proteins to make them more efficient for specific purposes. It consists of creating libraries of mutants of a given protein and being able to select mutants that are more efficient at carrying out the reaction of interest, similar to how evolutionary pressures drive a species to select for certain advantageous traits present in a population. Using this technique, they identified various mutation in their selected kinase to phosphorylate compound 1 and did the same for the uracil phosphorylase to produce compound 3.

These reactions could be carried out in the same synthetic step through the development of a cascade reaction[link], which would make the reaction more scalable by avoiding the need to isolate intermediates. The phosphorylation of compound (1) requires ATP, which can only be recycled when there is an excess of a separate phosphoryl donor, while the reaction to produce compound (3) results in production of inorganic phosphate. They decided to add pyruvate and pyruvate oxidase, an enzyme which incorporates inorganic phosphate to a carboxylic acid group while releasing CO2. The phosphorylated carboxylic acid molecule could then be used to generate ATP from ADP with acetate kinase, which is known to catalyze this reaction in bacteria [Figure 3]. Adding these additional enzymes allowed for an efficient cascade reaction because the phosphate that is produced upon the synthesis of compound (3) could be readily recycled to form more ATP, which is needed to generate compound (2).

The last modification required to synthesize molnupiravir was to modify a carbonyl group in the uracil ring to an oxime. After screening for several reaction conditions, the authors of the paper found that heating up compound (3) in the presence of mildly acidic bisulfate salts and using imidazole as a catalyst resulted in the production of a molnupiravir derivative with the alcohols in the ribose protected by ether groups. After removal of the salts, the ether protecting groups were removed by adjusting the pH of the solvent, allowing for the isolation of molnupiravir through crystallization.

With this new synthetic route, the production of molnupiravir can be shortened from 10 steps to 3, while increasing the yield from less than 10% to around 70% [Figure 4]. This method could hasten the production of this medicine, which is imperative to fight the ongoing COVID-19 pandemic.