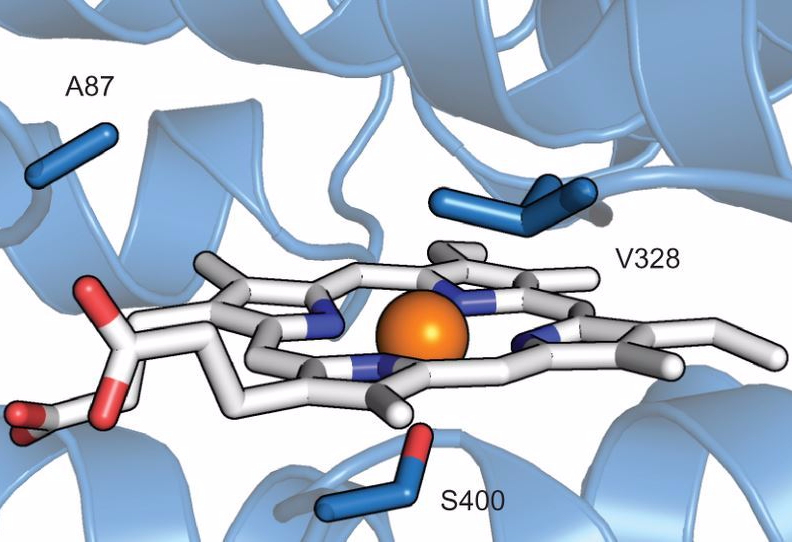 Enzymes are protein molecules that catalyze virtually every reaction within biological systems. Biology has done a lot of work on its own through evolution to create enzymes that are capable of doing nearly anything. They can produce lycopene (the compound that makes tomatoes red), opioid compounds like morphine, and can even catalyze the addition of halogens like fluorine (Figure 1). As versatile as enzymes already are, it’s actually possible to engineer enzymes to catalyze reactions that are entirely new to nature!

The benefits of enzymatic reactions for producing useful compounds are far and wide. In fact, an entire avenue of biology is devoted to combining synthetic biology with directed evolution to engineer enzymes and other molecules to perform brand new functions. Directed evolution involves mimicking natural selection by rationally changing the DNA that encodes for a protein to yield a desired trait. Synthetic biology comes into play when scientists attempt to re-engineer biology to do things that it doesn’t normally do. The authors here engineer an iron-containing enzyme to catalyze a novel biological reaction, the amination of a carbon-hydrogen bond of a benzyl group. An overview of this type of reaction is shown in Figure 2, where a hydrogen atom is being replaced completely by an amine group.

You may be wondering “Why is this reaction so important?” The reason is that nitrogen is present in a wide variety of useful compounds and the addition of nitrogen in a controlled manner to a highly stable bond like C-H is quite difficult. The researchers here replace hydrogen with an amine group in a single enzymatic step, which is an important move towards efficient and sustainable synthesis methods.

How did the researchers do this? While conducting research it is important to start with what you know. It was known that a group of enzymes known as Cytochrome P450 monooxygenases are capable of directly inserting oxygen into C–H bonds. The researchers then investigated ways to alter the P450 enzyme in order to catalyze a different type of reaction: inserting a nitrogen group instead of oxygen. Since enzymes are biopolymers (composed of many smaller units called amino acids), it is possible to change a few of the smaller units to invoke changes to the enzyme’s overall structure, stability, and function. Furthermore, altering the place within the enzyme where the reactants bind, know as the active site, can make the enzyme react with different molecules. The authors used a method known as site-saturation mutagenesis, which is a form of directed evolution. Using this artificial evolution method, it is possible to purposefully change the DNA that encodes for the enzyme and thus the enzyme’s properties. They began by altering the amino acid sub-units of the enzyme at designated areas, typically near the active site, that they thought would affect the types of reactions the enzyme can catalyze. They then selected for the production of aminated products to find the best engineered enzyme for the job.

Using directed evolution, the authors were able to find a beneficial mutation that gave the enzyme the ability to insert nitrogen into many different compounds (Figure 3).

It is very promising that amination reactions of this kind can be catalyzed using only an enzyme and an iron co-factor, both of which are earth-abundant substances and can thus provide a more sustainable means of synthesis. Interested readers can discover other new enzyme reactions and elemental incorporations, such as introducing silicon into the place of carbon in an organic compound, by visiting Prof. Francis Arnold’s website.