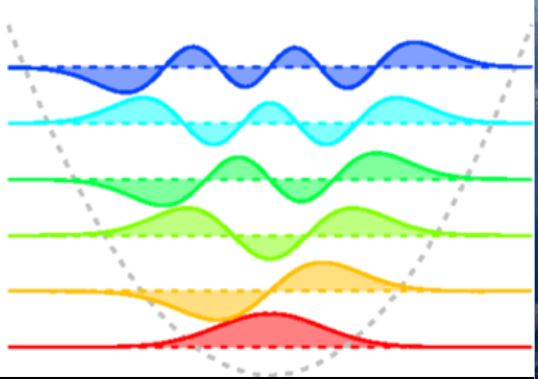 Molecules have different energy levels for their electrons, and these electrons can be excited through interactions with light in the UV and visible light. The technique used in this paper is two-dimensional electronic spectroscopy, which uses a “pump-probe” method. This pump fires a light to excite the chromophore’s electrons into an upper electronic state (excited state), and then fires another probe pulse of light to take a snapshot image of the immediate state of the chromophore. Here, the time scale of this is femtoseconds, or 10-15 seconds. Gathering the snapshot images together is like creating a flipbook animation of the electron’s behavior in the chromophore. This could allow researchers to probe and observe the excited state of the chromophore, as well as any vibrations that are associated with the configuration of the electrons. A schematic diagram for the electronic states and vibrational states can be seen in Figure 1, where the electronic states are represented as wells (dips in the energy landscape), and there are sequential vibrational states within each electronic state. A chromophore is excited by light absorption and relaxes  to the ground state through fluorescence.

Molecules with high electron density could ease the observation of electron vibrations under 2DES. Due to the presence of alternating single and double bonds in BODIPY molecules, which can interchange and share their electrons (Figure 2), they were chosen as the target chromophores. These molecules could be powerful energy capturers in a solar panel, which sparkled the interests of researchers.

Through their analysis, the researchers in this study were able to determine how the molecule interacted with its solvent, methanol, which allows for an understanding of the fast changes that the methanol causes in the chromophore. This is important for understanding how the chromophore in a solar panel may be influenced by its solvent, or how it interacts with molecules in the external environment. This benefits advancement for future solar panels. Additionally, the researchers were able to determine the types of vibrations that occurred at the same time as the electronic excitation. This shows what structure could best benefit molecules in light harvesting. This is crucial for designing the best molecule to capture energy!