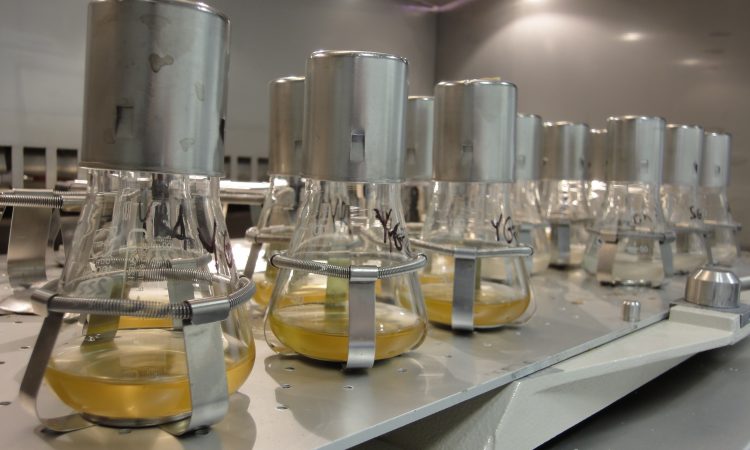 Journal: Proceedings of the National Academy of Sciences (PNAS), 2018

Humans have engineered microorganisms for thousands of years for a variety of purposes. We couldn’t enjoy beer, bread, milk, cheese, yogurt, and many other things without using engineered microorganisms like brewer’s yeast and lactic acid bacteria. In the past few decades, the engineering of microorganisms has skyrocketed into many different fields including synthetic biology and metabolic engineering. Scientists in these fields change the genetic make-up of microorganisms to produce tailored molecules and biological substances that are useful to society. One such goal is in the production of useful chemicals such as polymer precursors, dyes, and pharmaceuticals.

A microorganism is like a giant chemical factory, controlled at the most fundamental level by its genetic code, DNA. This code allows the organism to sustain itself by directing the production of protein components each with its own purpose – providing cell structure, performing catalysis, or signaling, for example. The catalytic proteins, known as enzymes, speed up thousands of reactions within the microorganism, comprising what is known as the microorganism’s metabolism. By rewiring a microorganism’s metabolism to focus most of its resources toward the pathway that produces a molecule of interest, researchers can engineer the microorganism to produce large amounts of the desired compound in a sustainable mannera.

In this publication, the researchers used a fungus to produce a compound known as triacetic acid lactone, or TAL. TAL is a so-called “platform chemical” that can be converted through downstream chemical processes to many useful compounds (Fig. 1). Triacetic acid lactone (TAL) is a polyketide, a class of the molecules containing many groups of ketides, which are molecules containing ketone groups. Ketone groups are easy to identify on a chemical structure – the oxygen double-bonded to carbon sticks out like a sore thumb (e.g., see Fig. 1). Commercially, polyketides are widely used as antibiotics, insecticides, and pharmaceuticals, so there is much interest in producing a larger variety of these molecules. Polyketides are not easily synthesized using chemistry alone since the molecules typically consist of many chemically-active groups and are structurally complex.

This is where biology has the advantage. Polyketides are common products of living creatures, especially plants and fungi. TAL is currently sourced from a flower known as Gerbera Hybrida. This limitation has prevented the widespread adoption of TAL for commercial applications because harvesting a small amount of a molecule from a large plant is wildly inefficient. Even more, predictions show that using flowers to produce TAL would require four times the quantity of global arable land just to sustain current demand of a single downstream food preservative, sorbic acid. And that doesn’t include any other downstream applications! To solve this problem, scientists can use genetic engineering to import enzymes from plants into microorganisms, then use the microorganisms to produce the compound. This method is much quicker and produces a higher quantity, especially given the small space a microorganism takes up.

Due to the versatility of TAL’s chemical structure, it can impart desirable properties when incorporated into a copolymer. Once polymerized, the TAL portion of the polymer can be further modified downstream to yield favorable material properties such as increased chemical resistance or an altered glass transition temperature. To this end, the researchers purified and co-polymerized the TAL produced by the engineered microorganism, making a co-polymer with the charming name PETAL, or poly[(epichlorohydrin)-co-(epoxy triacetic acid lactone)] (Fig. 2).

Although applications for these novel materials have not yet been realized, this work showcases the use of bio-sourced compounds for novel polymerization applications. With relatively straightforward bio-engineering, microorganisms can effectively produce versatile “chemical building blocks” to be used as feedstocks for new and exciting chemical and material applications.