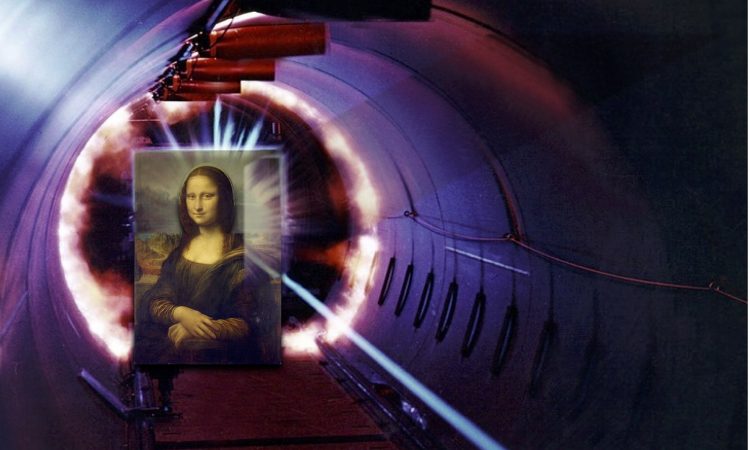 It’s been five hundred years since Leonardo da Vinci picked up his brush to begin his masterpiece, the Mona Lisa. Yet she still hangs on the wall of the carefully climate-controlled Louvre in Paris, her enigmatic smile recognizable after all these centuries. Her preservation from the depredations of time isn’t luck; it’s due to the careful work of art conservators over time.

But cleaning paintings can only do so much: even the structure of the paint itself can degrade. That’s where scientists can help. Using pump-probe microscopy, researchers at Duke University have been studying the degradation of vermilion – a red pigment found in many historic pigments. They’ve successfully used this technique to map the decay of vermilion across a painting, yielding valuable information to help art conservators preserve artwork.

Vermilion is mainly composed of mercury sulfide (HgS) in one of its solid-phase forms, called cinnabar (α-HgS). Renaissance painters loved vermilion for its rich rust-red color. But over time, the bright red of cinnabar can darken, becoming brown or black. Both metallic mercury (Hg) and the other solid phase of mercury sulfide, metacinnabar (β-HgS), could cause this darkening, but the reason for the conversion of cinnabar to these other forms hasn’t been clear. Analysis techniques that allow scientists to look at the elemental composition of a painting, like x-ray diffraction and x-ray photoelectron spectroscopy, can distinguish between the two phases of mercury sulfide, but aren’t sensitive enough to look at small areas of a painting.

Pump-probe microscopy, on the other hand, is very sensitive to small changes in position, so scientists can examine the edges of a region of degradation in a painting to see exactly what chemical changes are occurring. When a laser pulse is aimed at a region of the painting, some of the beam is absorbed by the chemicals in that painting, adding energy so that they enter an excited state. A pulse of white light – the probe – is then sent into the same region at different time delays after the initial pulse. Any molecule that was already excited by the pump can’t absorb the probe light at the same wavelength unless it has decayed back to the ground state. Therefore, the spectrum of the white light of the probe changes depending on how much time has elapsed since the pump pulse. The way the molecules decay depends on their chemical structure; therefore, the researchers were able to use this technique to distinguish between the two different forms of mercury sulfide.

Using references of red and black HgS powder and liquid Hg, the researchers used pump-probe microscopy to determine what each chemical’s signature looks like. They determined that, as expected, the black powder contained mainly the second kind of HgS, β-HgS. They were also able to use the high spatial resolution of the technique to find a few grains of β-HgS in the red HgS powder. But why do red sections turn black over time?

It turns out that these few grains act as seeds for the conversion of the α-HgS to β-HgS: as the red HgS was illuminated with strong UV light, the researchers were able to observe darker regions spreading from the few black seeds. To cap it all off, they were able to obtain permission from the North Carolina Museum of Art to shoot a laser at a 14th-century painting, St. John the Evangelist Reproving the Philosopher Crato, which contains areas of discolored vermilion.

In the poor philosopher Crato’s cloak, not only were the researchers able to identify signals that corresponded to their pump-probe microscopy on degraded vermilion – suggesting that the same exposure to UV light is producing the black β–HgS in this painting – but they also found areas of the painting where the vermilion wasn’t yet discolored, but already had black seeds of β–HgS forming. This means that art conservators could use this technology to identify and protect paintings at risk of degradation.

You might think science and art belong in different realms; but the Mona Lisa and every other historical artifact preserved by the careful work of conservators would prove you wrong. New tools in science, like pump-probe microscopy, can have new and exciting applications in art. And they just might save Crato’s red cloak.