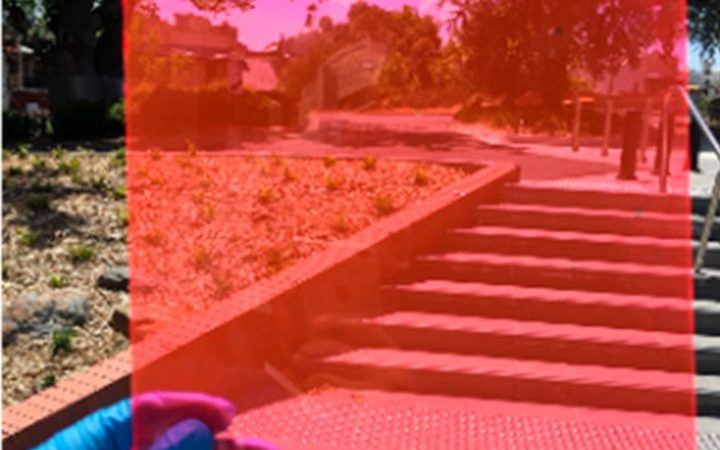 Solar panels  have great potential as a source of clean renewable energy for the world. They work by harvesting sunlight and generating electricity based on the photovoltaic effect. However, traditional solar panels are not the best for all locations, such as cities. Covering a building in solar panels would make it effectively windowless, and no one wants that.

To realize solar panels in an urban environment, researchers are looking at panels that can harvest only some of the sunlight shining on buildings, the same way a tinted window would. One way of doing this is a luminescence solar concentrator (LSC), which is like a tinted window (Figure 1), but generates electricity!

LSCs work by embedding luminescent materials (i.e. materials that glow) into a waveguide. This means that materials in the middle of a panel absorb photons from sunlight and luminescence to remit photons. The photons emitted travel through the waveguide (like a fiber optic) out to the edges of the panel. At the edges of the panel are traditional solar cells, which produce electricity when the emitted photons hits them (Figure 1). If the luminescent material is properly chosen, the end result is a tinted window directing light to the edges, where a solar cell converts the light to electricity.

Figure 1. (Left) Image of the luminescent solar concentrator film showing its “tinted window” like appearance. (Right) Scheme showing the operating principle of LSCs. The incident light is emitted by the dye layer, then reflected inside the waveguide to an electricity producing solar cell at the edge.

While LSCs are a great design in principle, in practice it is difficult to generate enough power to make their cost worth the electricity produced. This is due to the difficulty of finding materials to efficiently absorb and emit light in this system. Most materials are simply not bright enough emitters. This work from researchers at the University of Melbourne aim to solve this problem, by utilizing a donor acceptor dye system based on perylene diimide (Figure 2) as the luminescent material.

Figure 2. (Left) Molecular structure of the perylene diimide dyes used in the LSC. (Right) The absorbance and emission spectra of the LSC, showing the minimal overlap of the two curves.

One key factor in making an efficient LSC, is that the wavelengths of light absorption doesn’t overlap with the wavelengths being emitted. This allows the maximum amount of photons to reach the edges of the LSC by preventing re-absorption (i.e. the same material emitting the light, absorbs the light). By using a donor acceptor dye blend, this is avoided. The donor dye absorbs the sunlight and transfers the energy to the acceptor dye. The acceptor dye then emits longer wavelength photons to the edges of the LSC. This is shown in (Figure 2) that the absorbance spectra does not overlap with the emission spectra of the perylene diimide system.

To test this dye system, the dye blend was blade coated onto large area polymer substrates (Poly(methyl methacrylate, PMMA). Blade coating is an extremely scalable technique, that can produce large area substrates. This work shows substrates as large as 20×20 cm, which is getting close to window size.

The large area substrates were then equipped with solar cells on the edges to harvest the wave guided light. Since most solar cells are optimized to absorb the full spectrum of sunlight, it is  important to test various types of solar cells for the edges of LSCs, which don’t produce a full spectrum of sunlight. The best solar cell/LSC combination utilized an inexpensive perovskite solar cell. This yields a power conversion efficiency of 2.6%, which means 2.6% of the energy from the light is converted to electricity. Not bad for a tinted window!