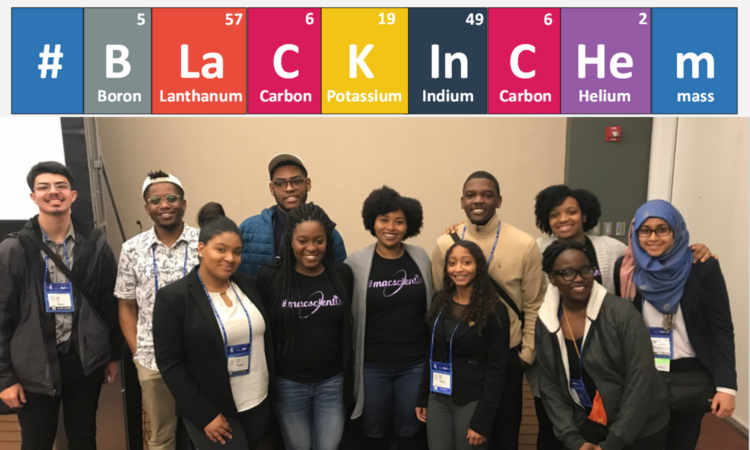 Sitting under the dim lighting in a movie theater, Devin Swiner’s mind raced as the credits rolled. She had just seen the courage, wisdom and intellect of Dorothy Vaughan, Mary Jackson and Katherine Johnson in the movie Hidden Figures. Like many viewers, Swiner was shocked that she had never heard of these women or their contributions to NASA’s scientific enterprise. Unlike others, however, Swiner’s movie experience was about to coalesce into an award-winning STEM advocacy program for Black women named Mac Scientists.

Swiner grew up in Prince George’s County, Maryland before obtaining her Bachelor’s in Chemistry at the University of Pittsburgh. That was the first time she’d gone from being one of many Black students in the most affluent Black neighborhood in America, to being the only Black person in the room at Pittsburgh. At the time, there was only one Black tenure-track professor in the chemistry dept, Swiner’s academic advisor Dr. Renā S. Robinson, who left for Vanderbilt in 2017. Devin was one of three Black students in her 2016 graduating class and the only Black woman.

Afterwards, she traveled to Columbus and Ohio State University to complete her doctorate in analytical chemistry, where the Black graduate community is even smaller. A monumental support system in her undergraduate and graduate careers were the student chapters of the National Organization for the Professional Advancement of Black Chemists and Chemical Engineers (NOBCChE). So influential were these groups that Devin eventually ran the Ohio State chapter as president for two years.

“I think it’s really special that NOBCChE fosters this sense of family and community amongst black chemists and chemical engineers. So as a member, the perks are literally endless…I’ve been on the board at Ohio State pretty much since I stepped foot on campus…but as a leader now, on my way out of grad school, it’s really important to me to give back. It’s important to pour into others as other people have poured into me.”

Swiner focuses on the long-term benefits and structures she can put into place for her students. When she first arrived at Pittsburgh, she had no idea how to advocate for herself, form a network, ask for letters of recommendation or get into research. It wasn’t until her spring semester junior year that her undergraduate mentor, Dr. Tara Meyer, found her at a poster session and immediately saw Swiner’s potential and interest in analytical chemistry. That was Devin’s first semester in the research lab and she quickly got hooked – she is now a self-professed “lab rat,” fascinated by all the puzzles that analytical chemistry can solve. But she never forgot how lost she felt at the beginning.

“I had no idea that graduate school was an option for me…I started late because I had no idea. And then when I found the people that were going to advocate for me [such as Meyer and Robinson, both involved with the Pittsburgh’s NOBCChE chapter], it was like, here’s a cluster dump of information for you…That was what really struck me, that it’s so easy for a lot of black students to get lost in the shuffle… I’m always thinking about what can I do now for my students that can help future students.”

“Can I put systems in place to make sure that everyone that looks like me coming through Ohio State’s doors feels supported, welcomed and valued.”

As Swiner walked to the parking lot with her long-time friend Carrie Alexander after Hidden Figures, these ideas of the Black and scientific community swirled in her head. When Devin gets an idea, she becomes obsessed, driven forward by a passionate need to solve challenging problems. She’s much like Rosalind Franklin analyzing the X-ray crystallography data from a calf thymus DNA sample; focused, methodical and going to extract an answer if it’s the last thing she did. Swiner deliberated if there was a way to connect her knowledge and experiences as a Black woman, often missing from the STEM narrative like Johnson and her cohort, to a wide-reaching audience while completing her graduate degree.

Devin found an answer to her rumination in that very parking lot, inspired by a loving nickname bestowed from her aunt: The Mac Scientists Blog.

Now in its fourth year, Mac [like the lipstick] Scientists brings together four Black women in chemistry, mathematics, engineering and information technologies to share their technical knowledge and experiences. Each of the site’s contributors writes under a mystical-sounding persona: The Chemist, The Technologist, The Analyst or The Engineer. Geared towards young career Black women, the blog covers topics from daily life (for example, natural hair tips and working in white-dominant spaces) to favorite courses in their respective programs. It also has a science communication section where “Macademics” can learn about different technical topics such as textile engineering or portable disease detection. In May 2018, the  Greater Pittsburgh Women’s Chemist Committee recognized Mac Scientists with the Award for Encouraging Women into the Chemical Sciences.

Swiner’s journey at Ohio State University concludes this upcoming year, where she has optimized a cellulose-based ambient ionization mass spectrometry method for forensic and medical purposes called thread-spray. Though originally hoping to continue in the forensics field, her current project with the Nationwide Children’s Hospital to develop thread-based skin patches for automated metabolite identification of cystic fibrosis swayed her to walk the biomedical route.

A “STEM advocate always and forever,” Swiner will continue writing for Mac Scientists and plans to expand her personal advocacy site, Devin The Chemist. Devin is also one of the founding organizers for #BlackInChem, which brings together Black chemists at all levels to amplify their voices and celebrate their past, present and future. The chemistry field is brighter for having (future Dr.) Devin Swiner in it, advocating for change, supporting her fellow chemists, and leaving behind a community and a legacy.