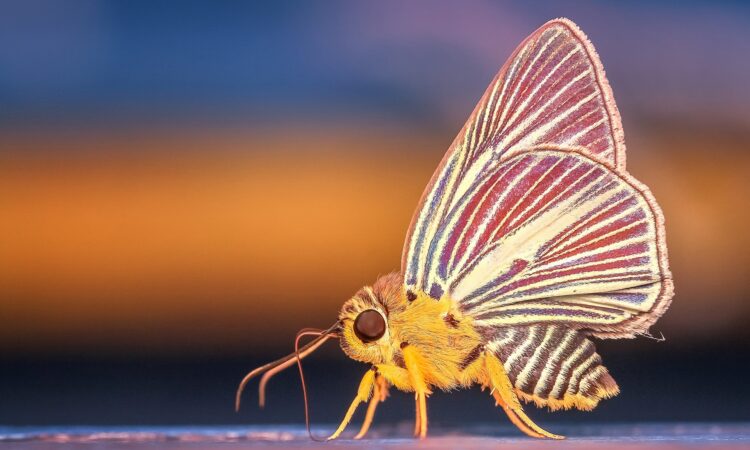 How Adsorption of Pheromones on Aerosols Controls Their Transport

When you think of the concept of “communication,” you likely think of a conversation between people using words. Animals use their own forms of sound-based communication too, as is instilled in us as soon as we learn how to read. In particular, insects like crickets and cicadas are well-known for the sounds they make, but this isn’t the only way they communicate. They also communicate by using pheromones, a type of biological signal essential to many aspects of animals’ lives, including finding each other across long distances, alerting each other to the presence of a predator, or in designating territorial boundaries.

The pheromones of moths are some of the most well-studied pheromones, and in fact, the moth pheromone called bombykol was the very first to be identified and characterized. The lengths to which chemists went to identify this molecule nicely highlight the advancements that have been made since then in instrumentation. Researchers in the 50’s needed about half a million moths to acquire enough material for detection, but using a modern GC-MS, a single moth is sufficient. Like most moth pheromones, bombykol contains long carbon chains with a polar head group, just like lipids in a cell membrane. Specifically, these molecules are hydrotropes, which are like surfactants in that they have a hydrophobic and hydrophilic component. But instead of forming micelles, they simply aggregate with other molecules to keep the hydrophobic components away from water.

In the over sixty years since the discovery of a pheromone, the mode through which they are transported from insect to insect is still not entirely understood, but a few possibilities have been proposed. The insect can release a “puff” of a pheromone which may float and diffuse away as a gas, or the pheromone may interact with tiny droplets of water in the air called aerosols (diameter ~ 100 nm). Because bombykol is a hydrotrope, it has low water solubility and preferentially localizes to the interface between water and air. This means that the bombykol is likely to adsorb to the surface of aerosols (Figure 1, bottom).

There are a few indications that insect pheromones may rely on aerosols to travel. For one, many insects spend their time close to the ground where humidity is much higher. Additionally, a relationship has been observed between fluctuations in humidity and the number of moth calls that can be heard. To gain insight into if bombykol moves by gas diffusion or aerosol-assisted transport, researchers have constructed a model for its movement through air.

In this model, the researchers considered how the pheromone molecules may adsorb or desorb (cling to or separate from) aerosols as they are moved in one direction by wind (Figure 1, top). The model tests out properties that depend on the molecule (how well it adsorbs to the aerosol) and the climate conditions present (humidity). The likelihood of a pheromone molecule adsorbing to a droplet upon contact is quantified by determining its energy of adsorption, Eads. This number describes the degree to which the pheromone molecule is stabilized by adsorbing to the surface –the higher this number is, the more likely the pheromone is to adsorb to the surface of a droplet. The likelihood of the molecule making contact with the aerosol to begin with is dependent on kinetic gas theory, which tells us that the likelihood of a molecule colliding with the aerosol will depend on factors like its molar mass and the temperature of the air. Finally, the number of “opportunities” the molecule has to collide depends on the size of the aerosol, which is determined by the humidity. Roughly thousands of molecules can be adsorbed to the surface of a typical 100 nm diameter aerosol.

Using this model, they determined which mechanism –gas diffusion or aerosol-assisted spread –would dominate as the pheromones were blown away from their source. The answer to this question changes with distance, how strongly the pheromones adsorb to aerosols, and what the concentration of aerosols is. At a particular value of Eads and humidity, as the molecules move away from the source, the dominant mechanism switches from gas diffusion to aerosol-assisted spread. This can be seen in the top right graph in Figure 2, where the red curve –indicating the number of molecules in the gas phase –dips below the blue curve –number of molecules adsorbed to aerosols.

These predictions have major implications for understanding the communication between insects. Under only gas diffusion, the pheromones will spread out very quickly over a large area and become nearly undetectable. If they spread via aerosol droplets, each droplet holds on to a large amount of pheromone molecules, effectively concentrating the pheromone in a smaller space. The arrival of pheromones by an aerosol is less frequent than by gas diffusion, but the aerosol delivers more pheromones at one time. This is depicted in Figure 3, where the number of pheromone molecules reaching the detector is shown in red for gas diffusion and blue for aerosol-assisted transport.