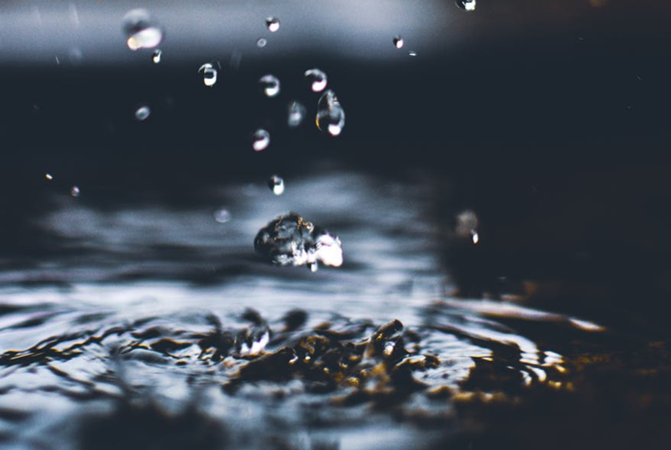 Have you ever appreciated a summer shower, taking a deep breath to smell the scent of rain? Or worked in a garden surrounded by the scent of fresh soil? For decades, scientists have known that this earthy smell comes from the molecule geosmin (Fig. 1A) produced by bacteria in the soil. Geosmin is a kind of volatile organic molecule (VOC): carbon-based molecules that easily evaporate at ambient temperature. The smell of rain comes from geosmin combined with various plant oils, a combination known as “petrichor” [1]. These earthy-smelling molecules are brought to our noses during a rain storm because raindrops hitting the soil trap small air bubbles containing VOCs within the water [1]. The air bubbles rise and burst out of the fallen raindrop, creating aerosols: tiny particles containing liquid, gas, and solids that are small enough to float through the air [1]. It has been known that many animals—including flies, mosquitoes, and humans—can smell geosmin, but scientists didn’t know why soil bacteria create geosmin in the first place. What is the biological advantage for bacteria to make this molecule? In the present study, Becher and co-workers decided to find out.

One of the most studied genera of soil bacteria known as Streptomyces, and species in this genus are known for producing many different small molecules including most of the antibiotics currently used clinically. Nearly all Streptomyces species produce geosmin. Because these molecules are dispersed into the environment, the scientists predicted that the benefit to Streptomyces for producing them may have something to do with attracting other organisms. For this reason, scientists set up tiny traps out in the field. Each trap was made of a sticky board so that any small organisms would stick to the trap. In the center of the board was either nothing (the “unbaited trap” control), a petri dish filled with agar but no bacteria (the “no bacteria” control), or a petri dish with agar and a culture of Streptomyces coelicolor (S. coelicolor, Fig. 1B) (the “baited traps”). Compared to the control traps, the baited traps captured a significant number of Collembola, more commonly known as springtails. Springtails are a group of wingless, six-legged arthropods that are not classified as insects, and they are almost microscopic.

When springtails were set up in Y-shaped tubes and given a choice between the wild type (WT) S. coelicolor and a mutant where the gene for the enzyme that produces geosmin was deleted, the springtails showed significant preference for the WT strain. To confirm that geosmin specifically was attracting the springtails, the scientists isolated 1 nanogram of geosmin and dissolved it in solvent for another Y-tube assay. Compared with solvent alone, once again the springtails significantly preferred the geosmin.

The scientists then visually observed springtails interacting with S. coelicolor in the lab and saw that the springtails were eating the bacteria. To understand why the bacteria might benefit from being eaten, the scientists thought about the life cycle of Streptomyces. First, a single-celled spore germinates in the soil [2]. Next, the cell replicates and divides to form a colony of bacteria, growing downward (like roots) in structures called vegetative mycelia [2]. Third, the colony grows upward (like stems) in aerial mycelia [2]. Finally, pieces of the aerial mycelia develop into single-celled spores with a hydrophobic (water-repelling) coating that allows the spores to fly through the air instead of sticking to the watery soil [2]. This allows Streptomyces bacteria to be dispersed, similar to how dandelion seeds are carried by the wind using feathery structures. However, other kinds seeds are dispersed by animals, such as in burs that stick to animal fur or in blackberries and other fruits that are eaten by animals and released in their feces. Indeed, when the scientists looked at the springtails under a microscope, they saw the hydrophobic Streptomyces spores sticking to the hairs covering the springtail’s body. The scientists were also able to grow Streptomyces from the isolated springtail feces, showing that the spores could be spread by the springtails in multiple ways.

Finally, the scientists analyzed the transcription of the geosmin-producing gene during different stages of the life cycle. They found that transcription was highest during the sporulation stage of the lifecycle, implying that the highest production of geosmin occurs as spores develop. This supports their hypothesis that the function of geosmin for Streptomyces is to attract organisms that will spread the bacterial spores to the surrounding environment.

So why does the smell of rain exist? Seemingly for the same reason as fruit: to entice hungry organisms to feast and—inadvertently—spread the offspring of their food source.