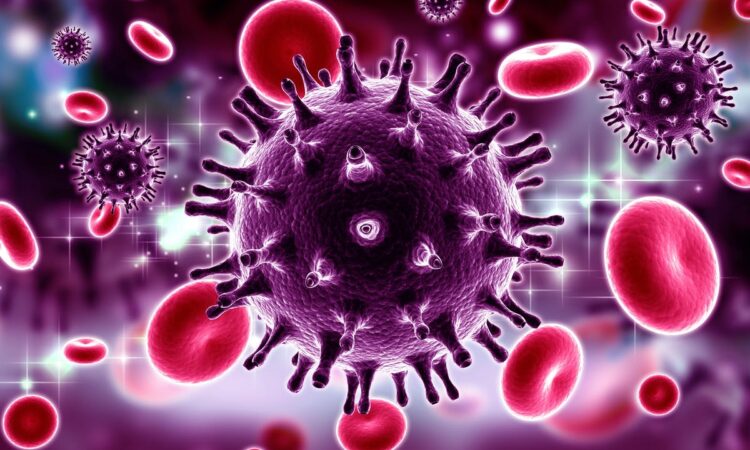 Title: Visualization of the HIV-1 Env Glycan Shield Across Scales

As the COVID-19 pandemic rages on and we race toward a vaccine, it is also worth remembering that we have still failed to develop even one successful vaccine against the last pandemic virus we faced: HIV, the virus that causes AIDS. While significant success controlling the spread of HIV has been achieved through education, non-pharmaceutical interventions like barrier protection, and more recently pre-exposure prophylaxis – administration of antiviral drugs to HIV negative people who are at a higher risk of contracting the virus – a vaccine, which is the gold-standard public health intervention for infectious disease, has still not been achieved. This, however, does not necessarily bode poorly for our ability to vaccinate against SARS-CoV-2. HIV is particularly challenging to vaccinate against because the virus is incredibly heterogeneous: it is believed that there is more genetic diversity in the HIV viral particles in a single HIV positive patient than all of SARS-CoV-2 worldwide. This difference in heterogeneity is observed due to a difference in mutation rate between the two viruses: HIV’s replication is much more error-prone than SARS-CoV-2’s, resulting in much more accumulated diversity1, 2. This is one of HIV’s most effective tools for evading the immune system, and also results in acquired resistance to antiviral drugs over time. Since HIV vaccines will need to induce responses against a broad array of different viral strains to be effective, developing such vaccines has been a significant challenge.

In infection or vaccination, the immune system responds to a protein, usually on the exposed surface of a pathogen, known as an antigen. This results in antibodies being raised against a portion of this antigen referred to as an epitope. The only antigen on HIV is the envelope (Env) protein, which is responsible for entry of HIV into the immune cells it infects. Env is also densely modified with sugar chains known as glycans, which obscure a large portion of the underlying protein. This “glycan shield” is a common feature on viral surface proteins (including Spike on SARS-CoV-2), and is one of the most common strategies viruses use to avoid immune detection. Glycans are by nature diverse and dynamic – they adopt many different 3D structures and rapidly interconvert between them – which makes it difficult for the immune system to raise antibodies against glycosylated portions of a glycoprotein. As a result, the glycan shield limits the availability of exposed protein epitopes that an antibody could target. Combined with the high protein sequence diversity of HIV Env, this glycan shield makes antibodies that are effective against many different strains of HIV, which are known as “broadly neutralizing” antibodies (bnAbs), very difficult to generate. Developing a method to identify an epitope that is consistently exposed across all of these dynamic Env structures would therefore facilitate efforts to select the appropriate target epitope for an HIV vaccine.

To address this issue, Zachary Berndsen and colleagues at the Scripps Research Institute in San Diego employed a combination of cryogenic electron microscopy (Cryo-EM), a powerful new technique for determining molecular structure, and computational modeling techniques to obtain a detailed visualization of the Env glycan shield that was able to capture its dynamics and identify several unshielded, potentially immunogenic sites that could be good targets for HIV vaccines. Cryo-EM is a form of microscopy that uses an electron beam instead of a light beam to magnify samples. The path of an electron beam can be bent more sharply than that of a light beam. This property, known as the diffraction limit, means that electron beams can magnify samples to a much higher resolution than light. Cryo-EM is performed on samples of a molecule in water that are frozen so rapidly that the water does not crystallize to form ice. Instead, cryo-EM can capture a slice in time of a dynamic system that is consistent with one of the structures that the molecule of interest adopts at room temperature. Significant advances have been made in cryo-EM detection and analysis in the last decade, which now enable the method to determine molecular structures at near-atomic resolution and which earned its inventors the Nobel Prize in Chemistry in 2017.

By taking advantage of these powerful techniques, Berndsen and coworkers were able to capture Env’s dynamics and identify several unshielded, potentially immunogenic sites that could be good targets for HIV vaccines. These pictures could then be assembled into an “ensemble model” of the glycoprotein, which captured the structure of the glycan shield over its total range of motion. Because they were not able to obtain cryo-EM data at atom-by-atom resolution, the authors also employed computational modeling to predict atomistic structures adopted by these glycans that could be used to generate hypotheses that could be tested by additional cryo-EM experiments. The authors synthesized these data into a model of the HIV Env glycan shield that led to several interesting conclusions. For example, they discovered that the glycan shield has significant higher-order structure: glycans attached to distant protein sites are able to form molecular interactions with each other, creating a “canopy” that covers a significant portion of the underlying protein surface, even parts that were not glycosylated. They also found that these highly interconnected “glycan clusters” were important for stabilizing the glycoprotein in the “prefusion” conformation, the structure necessary to facilitate viral cell entry, and that they were resistant to enzymatic degradation. This suggests that the HIV glycan shield has functional roles beyond just immune evasion, as previously thought, and has implications for the study of viral glycans more generally.

Alongside the important biophysical conclusions about the role of Env glycans in the glycoprotein’s structure and activity, the map of glycan structure generated by the authors in this paper has important implications for the basic biology of HIV’s immune evasion strategies and for rational vaccine design. The increased stabilization of protein structure by glycan interactions helps explain why some segments of the Env protein can be hypermutated without deleterious effects on its function. The dynamics elucidated by the ensemble model of Env provide insight into why some anti-Env bnAbs are less potent than many other antibodies, as they can only interact with certain conformations adopted by the glycoprotein rather than the entire structure. Moreover, since effective bnAbs generally target the glycan-depleted regions of the Env surface, their map can be used to evaluate the potential targetability of different epitopes of Env. This will be of help to vaccine developers when designing epitopes in an effort to induce the production of these bnAbs.