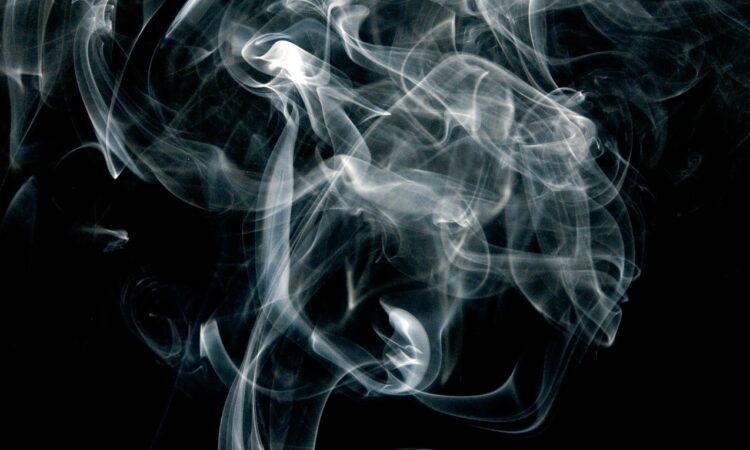 Title: Evidence on the formation of dimers of polycyclic aromatic hydrocarbons in a laminar diffusion flame

Cover image: by goranmx on Pixabay

If you followed the news lately you may have heard about the massive wildfires plaguing the Western US, and the terrible air quality that has impacted much of the region. One component of the air after a fire is soot, something you also observe after blowing out a candle. These researchers conducted experiments to understand the composition of soot and the chemical reactions that create it.

The scientists used a methane-air laminar flame, meaning it is smooth rather than turbulent, like the candle flame in Figure 1. They used the flame’s light emission to identify where the soot was in the flame and identify the spots where they wanted to sample, and chose to sample directly in the center of the flame and the surrounding halo (Figure 2). Then the soot and condensable gases that were created at different burn times and at different heights in the flame were sampled. To determine which chemical species were present in the sample, molecular mass was measured using time-of-flight secondary ion mass spectrometry, a technique in which an ion beam  ionizes the sample, giving each molecule a charge, and an electric field separates the ions by their mass and charge, so that the mass can be determined based on the time each molecule reaches the detector. More information about the size and chemical composition of the particles was determined by Raman spectroscopy, which uses light to determine vibrations of the molecules.

These researchers found something surprising in the formation of the gases and soot particles in the flame. They found that there were species called polycyclic aromatic hydrocarbons (PAHs), molecules comprised of 6-membered carbon rings, that would dimerize, or come together in pairs. They found that this dimerization chemistry is dependent on the molecular structure of the PAHs, with smaller PAHs with 12-20 carbons dimerizing and forming a C-C covalent bond, while larger PAHs did not. This conclusion was drawn from the pattern observed in the mass spectra collected, where the mass of each the dimer corresponded to the combined mass of two original PAHs, minus the masses of the two hydrogen atoms that must be lost in dimerization. They also found that in the center of the flame, there were soot particles mixed with the condensable gases, while in the halo of the flame there were only condensable gases. This could indicate that there is different chemistry occurring in the different regions.

This research will help to improve the way scientists study flames, including how scientists model flames, analyze the rate of combustion reactions, and study the chemical components through mass spectrometry. These flames are encountered in any situation where we are burning a fuel in a still environment, so it is useful to understand their properties. Plus, it is cool chemistry to understand what is happening in a complex system like a flame!