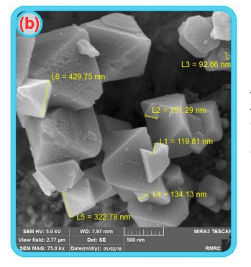 The discovery of antibiotics has allowed us to treat many kinds of bacterial illnesses that used to cause serious illness and death. Ciprofloxacin is a 37 year old antibiotic that, while extremely useful in treating a wide variety of bacterial infections, is highly water soluble and tends to persist in bodies of water including wastewater and the ground water and lakes and streams it eventually ends up in. When the antibiotic concentrations in the water increase, ciprofloxacin can have adverse health effects in humans and encourage the growth of antibiotic resistant bacteria.

Recently, researchers from India and Germany set out to develop a low cost method to detect ciprofloxacin in water that doesn’t rely on specialized personnel or equipment. They designed a metal organic framework, or a MOF, consisting of a copper ion caged in by molecules of benzene-1,3,5-tricarboxylate. MOFs are metal atoms or ions surrounded by a scaffold of organic molecules to produce a 3D network with pores that can provide interesting chemical functionality. This complex was called Cu-BTC. The researchers hoped that the antibiotic would be able to interact with the MOF in a way that would change its electrochemical properties. This MOF usually had a few water molecules coordinated around the copper. However when ciprofloxacin was in solution, electrostatic interactions between the antibiotic and the copper displaced the water, which decreased the conductivity of the MOFs. The researchers were able to measure changes in the electrochemical behavior of the copper when this displacement happened, and correlate this to get the concentration of ciprofloxacin in solution.

For actual sensing experiments, the researchers had to measure the change in the resistance to electric current of the MOF. To measure the electrochemical behavior, researchers used both electrochemical impedance spectroscopy (EIS) and differential pulse voltammetry (DPV). EIS measures the resistance of a solution to an alternating current. When Ciprofloxacin coordinates with the MOF, the copper ion becomes less able to transfer an electron as it sequentially switches between Cu, Cu+, and Cu2+ states. Copper without the MOF would not complex with ciprofloxacin and show this change in electron transfer behavior. This causes the impedance measured by EIS to rise, in a linear response, as the amount of ciprofloxacin in the solution increases, allowing its concentration to be measured. Differential pulse voltammetry works by applying a pulse of voltage to the solution containing the MOF and any dissolved antibiotics. The copper in the MOF will produce a current in response to a voltage pulse. The more ciprofloxacin is present, the lower the current will be, providing an additional pathway to determine the concentration of ciprofloxacin.

Figure 1: Differential Pulse voltammetry works by changing the voltage applied to a system of the MOF in an antibiotic solution. As the voltage changes, a current will be produced from which the concentration of ciprofloxacin can be calculated.

To visualize the MOF, researchers performed scanning electron microscopy (SEM) and X-ray diffraction (XRD) measurements. These techniques allow for microscale objects to be visualized and the crystalline properties to be understood. These measurements revealed that the compounds were consistently between 1-5 μm and had an octahedral geometry. The surface area of the MOF crystals was measured, because higher surface area structures often allow for more sensitive sensing, and was found to be lower than other copper MOFs, which the authors attribute to possible residual solvent making the surface appear smoother than it was in reality.

MOFs are frequently unstable in water, so to ensure Cu BTC would hold together well enough for a sensing application, researchers immersed it in a water solution for 2 days before taking a second XRD spectrum. They didn’t notice any changes in the spectrum, indicating that the structure was stable for a long enough period to be used in sensing applications. Although previous research has indicated the structure may not be stable on longer time scales.

To maximize the usefulness of the MOF as a sensor, the researchers optimized the accumulation time and pH of the sensor. Having these parameters optimized allows the sensor to more accurately differentiate between similar antibiotic concentrations. They determined that 60 seconds was the ideal time to expose the sensor to a ciprofloxacin solution. The ideal pH was between 7 and 8. With these parameters optimized, the sensor was able to detect ciprofloxacin between 0.01 to 20 μM in samples. This is low enough to measure the antibiotic in heavily contaminated waste streams. The sensor was able to accurately measure the concentration of ciprofloxacin even in the presence of other related antibiotics and could be used successfully after storage of at least up to 28 days. The developed sensor was able to accurately measure ciprofloxacin concentrations out of tap water successfully. This technology is a step towards being able to provide widescale low-cost testing of potential public health threats that aren’t restricted by a need for expensive equipment or highly trained technicians.