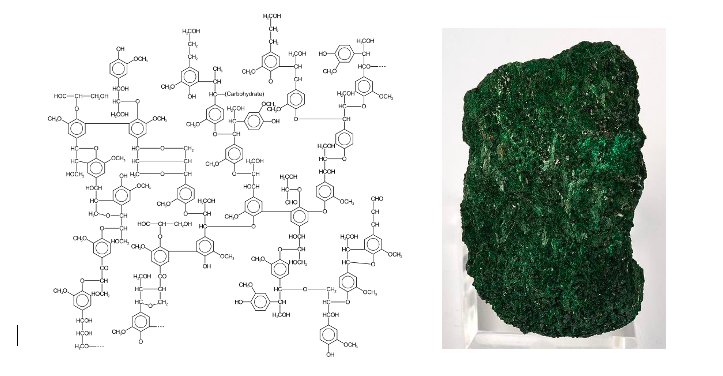 The rapidly growing world population has placed continuous pressure on farmers to increase farmers to increase crop yields to produce more food. One important component of this work is protecting plants from pests and disease. This is often done with pesticides made of small organic molecules, however copper compounds have also been used since the 19th century to protect plants. Copper kills bacteria that may cause plant disease by depolarizing their membranes or by creating reactive oxygen species that harm the bacteria’s ability to grow and reproduce. While copper is relatively safe, however, it can cause negative environmental and health effects in large concentrations, particularly if it leaches into groundwater. Researchers from Italy, Austria, and Finland recently developed a method of combining copper ions with the waste product lignin to decrease the amount of copper ions needed to prevent disease.

Lignin is a component of wood that is considered a waste material in paper manufacturing. It is usually burned to provide heat to make paper, however its complex chemistry means it could potentially be used in high-value processes. This paper reports a complex between lignin and brochantite, a copper compound with the formula Cu4(OH)6SO4.(Figure 1) .. At low ratios of copper relative to lignin, this synthesis gives small spherical particles of pesticide. When the copper-to-lignin ratio goes up, rod-like nanostructures are formed instead of spheres. These materials were synthesized both using a traditional synthetic process where the copper and lignin were mixed in a basic water solution as well as in a more sustainable method where the compounds were mechanically ground together, reducing the amount of waste-water.

Figure 1: The pesticide was made from lignin, a highly branched biological polymer that helps make the cell walls of plants rigid (shown on left) and brochantite, a copper containing crystalline compound (shown on right) Image Credit: Glazer, A. W., and Nikaido, H (lignin) and Rob Lavinsky (brochantite)

The authors used a variety of methods to determine the composition, shape, and size of the material. To evaluate the structure of the copper complexes, researchers used X-ray powder diffraction and Inductively Coupled Plasma − Atomic Emission Spectroscopy analyses to measure the crystal structure of the copper/lignin particles and the kinds of atoms in the complex respectively. Transmission electron microscopy was also used to image the shape of the copper-lignin complexes. Inductively Coupled Plasma − Atomic Emission Spectroscopy analyses revealed that the copper used as a starting material was entirely bound up with lignin after the reaction. This allowed researchers to precisely measure the amount of copper in the solid pesticide before they applied it to plants. This was confirmed by X-ray powder diffraction experiments. When copper made up 3% of the sample by mass spheres of 2 to 20 nm formed. When the copper was at a higher concentration, however, anywhere between 6 and 20% by weight, rods formed that were about 10 to 20 nm thick and anywhere from 40 to 150 nm long. The shape of the particles is important because it influences how well the pesticide particle can stick to a plant leaf and slowly release its copper.

Disease-prevention activity of the copper ligand particles were measured in tomatoes, against five different disease agents. When exposed to the fungus Botrytis cinerea, the tomatoes, 46% of leaves treated with a low concentration of the copper/lignin complex were diseased 7 days after the leaves were exposed to disease-causing bacteria. At a higher concentration, 21.6% of leaves were diseased. Using the traditional pesticide, copper hydroxide Cu(OH)2, which releases much more copper into the environment than the new complex, 35.1% of leaves were diseased. Similar trends held for the other diseases (Figure 2). In strawberries, which were only tested with the fungus Botrytis cinerea, the 10% by weight copper complex performed similarly to chemical pesticides and much better than biological pesticides. The complexes with higher copper-to-lignin ratios seemed to perform better, even when the total mass of copper was normalized. The authors hypothesize that this may be because the rod-like structures adhere better to leaves, allowing them to remain attached and effective for a longer period of time.

This new pesticide has a couple advantages over older copper-containing compounds. It takes lignin, which is traditionally regarded as little more than a waste product, and incorporates it in a higher-value material as part of a pesticide. It also uses less copper to provide the same amount of protection to plants, which could ultimately decrease the amount of copper leached into the environment.  Finally, while not the main focus of the paper, the mechanical synthesis of the pesticide minimizes waste and maximizes sustainability. Once further research validates the effectiveness, this type of “green” pesticide could potentially be used on a larger scale to increase yields while minimizing environmental damage.