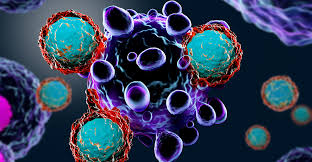 Genetically-engineered cell therapies are poised to become some of the most potent weapons in our arsenal against cancer and immunological diseases. Unlike normal drug-based therapy, which perturbs the function of proteins and other components of the cells already in a patient’s body, cell-based therapy introduces new cells into the body, where they can proliferate, respond to changes in the microenvironment of diseased tissue, and execute complex tasks for therapeutic benefit. The most well-known example of cell-based therapy approved for use today is known as chimeric antigen receptor (CAR) T cell therapy. T cells are a type of cell in the adaptive immune system, whose job it is to locate damaged, infected, or cancerous cells and eliminate them. CAR T cells are an engineered form of these cells that are derived from the patient’s own body and modified with a specific receptor that can recognize cancer cells. In some cases, this has enabled remarkable successes in the treatment of certain cancers, even when they have shown resistance to many other forms of treatment.

Despite its promise, significant toxicity is also associated with CAR T cell therapy. While these T cells can kill cancer cells, they can also do significant damage to healthy cells if left unchecked. And unlike drugs, which are cleared from a patient’s system in time, these T cells can make copies of themselves, and thus take up permanent residence within the patients. As a result, the ability to control these CAR T cells by turning their cell-killing ability on and off would significantly improve their safety. To address this need, Jan and colleagues at the Broad Institute in Boston, MA developed a chemical strategy whereby an FDA-approved drug could modulate the toxic effector functions of these T cells, endowing these “living therapeutics” with a level of control that clinicians are accustomed to with drugs.

To develop these molecularly-switchable CAR T cells, the authors made use of a class of compounds called thalidomides, which are capable of acting as molecular glues. Despite their troubled history – thalidomide itself was originally administered to pregnant women before it was discovered to cause serious birth defects – thalidomides today are an important class of FDA-approved anti-cancer compounds. They function by binding to a protein called cereblon (CRBN), changing its molecular surface so that it can bind with proteins that it wouldn’t in the absence of the thalidomide compound (Fig. 1)1. Cereblon itself happens to be a component in an E3 ubiquitin ligase complex. These protein complexes are responsible for marking certain specific proteins for degradation by attaching a series of small proteins known as ubiquitins. Once a protein is marked with these ubiquitins, it quickly gets degraded by another protein complex known as the proteasome (Fig. 2)2. While CRBN has a set of preferred protein targets in the absence of thalidomides, when the molecular glue is added, new and different proteins get recruited to the cereblon E3 complex, and these proteins become targets for degradation instead. The thalidomides’ anti-cancer activity derives from the fact that some of these newly-targeted proteins help drive the expansion of a tumor.

Figure 1: Lenalidomide, a thalidomide analogue, can enable CRBN to interact with proteins outside its normal repertoire.

Figure 2: E3 ligases act as part of protein complexes to add ubiquitin (Ub) to proteins to mark them for degradation by the proteasome.

Though the proteins they target alone make them drugs in their own right, thalidomides have also given rise to an entire class of new therapeutics known as proteolysis-targeting chimeras (PROTACs), which convert chemical inhibitors of proteins into drugs capable of degrading their targets. By attaching thalidomide or one of its analogues to a drug targeting a certain protein, the E3 ligase complex thalidomide binds can be re-targeted.

The authors envisioned that the ability of thalidomides to act as molecular glues and to induce the degradation of proteins could be a useful way to exert chemical control over the biological processes that drive CAR T cell activation. Specifically, they sought to create a way to use thalidomides to either degrade or activate the CAR that gets engineered into these cells as a way to retarget them toward a tumor.

The CAR functions by interacting with some marker protein on a tumor (the “antigen”), and then sending a signal to the inside of the CAR T cell that it should activate its effector functions, which result in the death of the targeted cell. A standard CAR has a number of components: the extracellular region, which recognizes the target antigen; a transmembrane region; and several intracellular signaling domains, which relay to the cell that the target antigen has been recognized. To create a thalidomide-deactivatable CAR, they took a version of a CAR and added a sequence to its intracellular region present on proteins that CRBN degrades in the presence of thalidomide, known as the IKZF3 degron tag. In the absence of a thalidomide compound, this tag does not interfere with the normal functioning of the CAR. However, when thalidomide is added, CRBN interacts with this IKZF3 tag, leading to ubiquitination of the CAR and its subsequent degradation by the proteasome, which stops the CAR T cell from becoming activated (Fig. 3).

Figure 3: Fusion of the IKZF3 degron tag to a CAR causes it to degrade in the presence of the thalidomide analogue lenalidomide.

To generate a thalidomide-activatable CAR was somewhat more complicated. However, the same approach of using thalidomide as a molecular glue proved useful. Here, the authors produced a pair of proteins. The first contained the CAR’s extracellular antigen-recognition domain, a transmembrane region, and the IKZF3 degron tag. The second protein contained a transmembrane region to anchor it to the membrane, a mutant form of CRBN, and the intracellular signaling domains found on a normal CAR. This mutant form of CRBN had been engineered to no longer associate with the E3 ligase complex that marks proteins for degradation, so that it thalidomide would not result in CAR ubiquitination and degradation. Instead, the thalidomide would “glue” the intracellular signaling domains to the extracellular recognition domain, allowing it to then activate the CAR T cell if thalidomide is present (Fig. 4). To be especially certain that thalidomide did not lead to degradation of the engineered CAR by the unmodified CRBN still present in the CAR T cell, the authors also mutated several amino acids on the region containing the IKZF3 degron tag so that they could not be ubiquitinated.

Figure 4: Lenalidomide can be used to activate a split CAR by causing its receptor components to interact with its signaling components.

Next, the authors showed that they could use thalidomide analogues to activate or degrade their modified cars using a bioluminescence assay. They were able to show that normal therapeutic concentrations of lenalidomide, one of the thalidomide analogues approved by the FDA, enabled significant control over the activity of these constructs. However, they sought to improve the system to function on sub-therapeutic concentrations of lenalidomide as a way to mitigate potential side-effects from its normal activity as a cancer chemotherapy. To accomplish this, they performed a screen for modifications to the degron tag that would increase the affinity of CRBN for the tag in the presence of lenalidomide. They created a library of potential degron tags based on sequences known to interact with CRBN in the presence of lenalidomide. By fusing the members of this library to the green fluorescent protein (GFP), they could monitor the degradation of different potential tags and thus identify the most effective ones (Fig. 5). Incorporating these newly discovered modifications, the authors showed that lenalidomide could still lead to degradation or activation of modified CARs at concentrations lower than that which the FDA has already deemed safe for use in humans.

Figure 5: Schematic of the authors’ screen for optimized tags for CRBN/thalidomide-mediated degradation.

With these newly optimized constructs in hand, the authors were then able to apply their technology to confirm its activity in cell culture and in animal models. In cell culture, they combined their modified CAR T cells with cancer cells expressing the CAR’s target antigen, and then showed that lenalidomide could either increase or reduce the survival and proliferation of the cancer cells, depending on which modified CAR the T cells had been outfitted with. In mice, they used the analogue pomalidomide and showed drug-induced changes in the CAR T cells’ activity via another bioluminescence assay when they were introduced to a mouse with cancer. They also showed a reduction in the cytokines interferon-g and IL-2 when mice containing off-switch CAR T cells were treated with thalidomide analogues. These signaling molecules are used by the immune system to control inflammation, and their reduction is consistent with pomalidomide-mediated reduction of CAR T cell activation.

While cell therapy remains rare today, it is widely believed that CAR T cells are merely the beginning of a new wave of promising potential cures to a variety of diseases that remain challenging to treat. However, for this future to be realized, these powerful therapies will need control systems that will give individual physicians direct control over their activity once they are deployed in the patient. With this work, Jan and colleagues have made a significant step forward in our ability to control the activity of these cells in patients and outlined a broader strategy for the precise control of engineered cells using drugs.