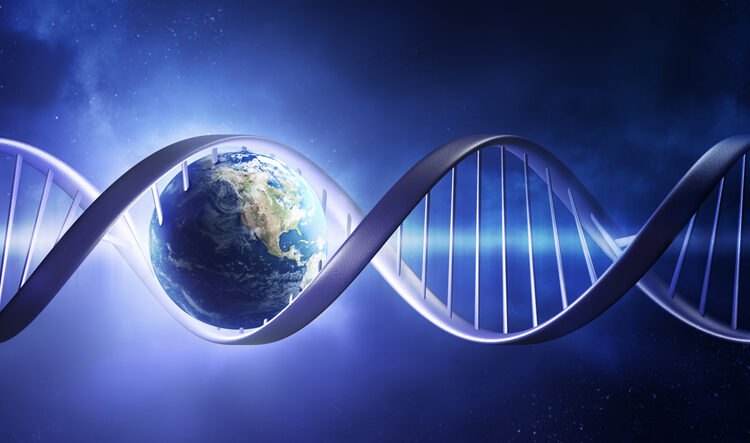 Title: A Model for the Emergence of RNA from a Prebiotically Plausible Mixture of Ribonucleotides, Arabinonucleotides, and 2′-Deoxynucleotides

Modern Earth is teeming with life, but that has not always been the case.  The Earth formed about 4.5 billion years ago, and at that time the planet was hot and uninhabitable.  But after a relatively short period of cooling, geological evidence suggests that the first life appeared on Earth.  How did that happen?!?!  The origin of life is still one of the biggest mysteries facing the scientific community.

A leading hypothesis for the origin of life is called “RNA world”.  In the RNA world, RNA molecules act as both storage for genetic information and as functional enzymes.  In contrast, modern life uses DNA to store genetic information, and protein enzymes to perform most functions.  Biology classes often teach that RNA is only a carrier of information between DNA and protein.  But that’s not true!  Many functional RNA enzymes have been discovered (for instance, the ribosome).  The dual ability to store genetic information and have enzymatic function suggests that RNA could have played a central role during the origin of life.  If RNA molecules can form spontaneously from a mixture of building blocks, that would be a major first step toward life!

To address these questions, the researchers set out to measure how long it takes to add each nucleotide version to a growing RNA chain.  Ribonucleotides, deoxyribonucleotides, and arabinonucleotides were separately reacted to elongate an RNA chain.  Once the nucleotides became incorporated into the chain, those chains were analyzed via gel electrophoresis.  Gel electrophoresis separates RNA molecules based on length, and so the researchers were able to separate the initial RNA chains from the extended RNA chains.  After separation, the concentration of these RNAs was measured with the help of a fluorescent marker embedded in the chain.  This data allowed the researchers to calculate the rate at which different nucleotides were added [Fig 3].  These data suggest that addition of a ribonucleotide to a growing RNA chain is much faster than addition of the other two versions of nucleotides.  This begins to explain how pure RNA could form: the RNA nucleotides get added to a growing chain faster than deoxyribo- or arabino- versions.

Next, the researchers asked how an incorporated deoxy- or arabinonucleotide affects the rate of addition of subsequent nucleotides.  Using similar methods to their last experiment, they find that if a deoxyribonucleotide does get added to the chain, then the addition of the next nucleotide is significantly slower [Fig 4]!  This means that the deoxyribonucleotide hinders chain elongation.  But even more shocking, if an arabinonulceotide gets added, then the addition of the next nucleotide is completely prevented!  This is a huge problem; long chain lengths are needed for RNA to store information and develop enzymatic functions.  If an arabinonucleotide prevents chains from growing to long lengths, its incorporation in RNA polymers would be a major barrier for the origin of life.

These results suggest that it is plausible for pure RNA to emerge from a mixture of nucleotide building blocks, because the ribonucleotides get incorporated into RNA chains more rapidly than the other nucleotide versions.  This is an exciting finding that supports the RNA world hypothesis for the origin of life!  But there’s still so much to be learned about the chemistry that led to life’s origin, so keep your eyes peeled for future updates!

I am a graduate student in the Chemistry Department and Astrobiology Program at University of Washington. I study fatty acid membranes and roles that those membranes could have during the origins of life on Earth. I also enjoy mountain sports, cooking, and time travel movies.