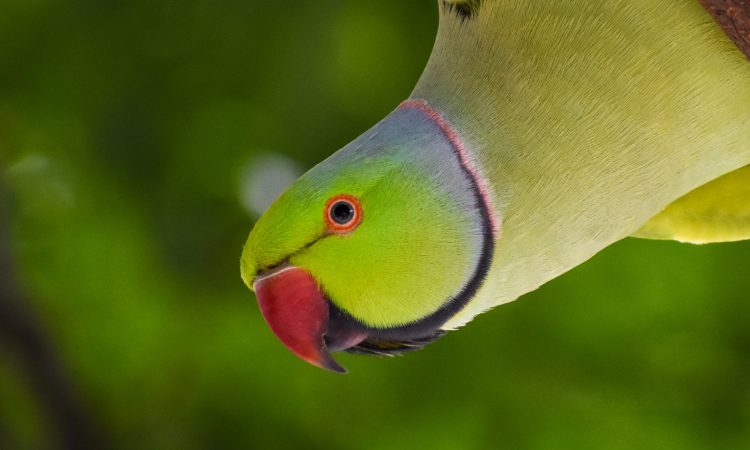 Photo by Shubham Dangi on Unsplash

In the most recent David Attenborough documentary “Life in Color,” we see a series of vividly colored green and blue birds, including peacocks, toucans, and parrots. The documentary takes a unique perspective on the topic of animal coloration by showing us how the animals themselves perceive color and how that might be different from what we see. However, what the documentary does not address is the fundamental mechanism by which birds produce these colors and how it is so different from that of humans and other mundanely colored mammals. Surprisingly, despite their apparent color, these birds have no way of producing blue or green pigments. Instead, birds have found another way to make these colors, which is by using a palette of materials already available in their skin: keratin and collagen.

Keratin and collagen exist in the fur and skin of most mammals without any remarkable color, but birds transform these key structural proteins into colorful materials by folding them into highly complex and organized shapes as small as the wavelength of visible light (~400-750 nanometers). This phenomenon is known as structural color because the color of the material depends on its size and shape, not just the material itself. A more familiar source of color comes from the presence of molecular pigments, like those found in plants and the dye we use to color our clothing.

Leafbirds like the one shown in Figure 1a are a family of birds native to South and Southeast Asia with brightly-colored blue and green plumage (and even recently inspired the design of a flashy evening gown by a Philippines-based designer). Each of the leafbird’s feathers contains nanoscale-sized keratin crystals featuring a series of twisting channels of air within the keratin matrix (Figure 1b). The unique shape of these crystals, known as a gyroid (Figure 1c), gives each feather its color by absorbing all wavelengths of light except for the color it appears as, which is scattered back at the viewer. Within the crystal, the light bounces off the interfaces between the keratin and air channels in such a way that certain wavelengths of light will destructively interfere, and therefore not be scattered back. Because of the way these crystals interact with light, they are known as photonic crystals.

Birds feature their plumage in highly animated, brightly colored courtship displays intended to catch the eye of potential mates, so evolutionary pressure drives the development of colors which are more visible to other birds. Because birds use photonic crystals to give each feather its color, they can manipulate one of the properties of photonic crystals, their brightness, or how well they reflect light back at the viewer. A photonic crystal’s brightness is determined by how organized the crystal is. The crystal will only produce a certain color if it is a very specific shape, so the greater the distance across which the crystal can maintain that shape, the more vivid the color. So, birds can evolve ways to produce crystals which are more ordered.

Recently, researchers have uncovered an example of how leafbirds have specifically evolved more vivid green and blue colors compared to their close relatives, the fairy bluebirds. By examining the photonic crystals in the feathers of both species, they found that the leafbird feathers contain three-dimensional (3D) photonic crystals compared to quasi-ordered 3D crystals in the fairy bluebirds.

A so-called “quasi-ordered” 3D brick structure would have a series of brick walls separated at a specific distance apart, but after a certain distance, the walls would lose their order and be spaced randomly apart. Comparing the feathers of fairy bluebirds and leafbirds allows us to see snapshots along the evolution from quasi-ordered to fully-ordered 3D photonic crystals in nature and develop a better understanding of how birds have become so brightly colored.