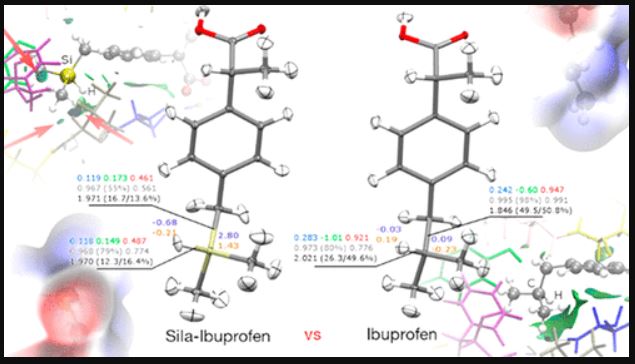 Everyone is familiar with pain killers, especially ibuprofen. It was invented in the 1960s as an analog of aspirin. By 1985, more than 100 million people in 120 countries had received it for pain, fever, headache, arthritis etc. Pain in the body is caused by the synthesis of prostaglandins from arachnoids, brought about by COX-I and COX-II enzymes. COX-I is always present and its inhibition damages mucous layers and results in ulcer formation and other gastrointestinal issues. However, COX-II is active only during inflammation and its inhibition reduces the pain without the side effects. Ibuprofen’s ability to selectively inhibits COX-II enzyme contributed to its popularity.

Ibuprofen has a low solubility due to its high melting point and high melting enthalpy. This greatly limits its use as a non-steroidal anti-inflammatory medicine as it cannot be administered intravenously for postsurgical pain. The scientists Kleemis et al., however, have modified ibuprofen by employing a carbon-silicon switch. Using 2-[(4-bromomethyl) phenyl] propionic acid and dimethylchlorosilane (Me2SiClH) in combination with triethylamine (NEt3), they first inserted a silyl ester to protect the carboxylic group followed by the reaction of bromoethyl group in presence of magnesium and Me2SiClH to insert the silicon atom at the desired location. Subsequent treatment in an aqueous medium deprotected the carboxylic group to give the final product, sila-ibuprofen (shown in Scheme 1).

Sila-ibuprofen and ibuprofen have similar molecular and solid-state structures, based on x-ray diffraction experiments and there is a 7% change in molecular volume based on the molecular isosurfaces. The H-C and H-Si bond lengths differ by 0.374 Å and the bond angle by 0.68°. Sila-ibuprofen shows a negative electrostatic potential (the potential of a proton at that location in the molecule) around the silane hydrogen atom whereas the same area has a positive potential in ibuprofen. Furthermore, sila-ibuprofen has a greater internal charge separation. This change in the electron density around the C/Si atoms (shown in Fig.1) and bond properties reflects in the change in physical properties.

Molecular dynamic simulations revealed that for the two compounds, the interaction of carboxylic acid group with the arginine residue on COX-II is key to its recognition. The interactions of the phenyl rings with glycine-alanine residue and those involving the C-H and Si-H bonds make ibuprofen more stable than sila-ibuprofen, but the stability of sila-ibuprofen is due to the interactions of methyl and methylene groups next to silicon with methionine-valine, phenylalanine and seine-leucine residues on COX-II (shown by arrows in Fig.2). The small energy differences in binding of ibuprofen and sila-ibuprofen to COX-I and COX-II compared to the total binding energies explains the similar IC50 values of the molecules. Besides this, the small destabilization of sila-ibuprofen in COX-I compared to the small stabilization in COX-II makes it a promising candidate for drug development.

For a drug to be accepted as a medicine, one must also keep in mind its potential toxicity. Studies on cell lines showed that sila-ibuprofen has a low toxicity, that at concentrations of 300 µM, it does not affect cell proliferation or cell viability. There was also no change in the cell morphology or any extracellular activity at concentrations of 1000 µM. The lack of differences in the toxicity parameters observed for ibuprofen or sila-ibuprofen suggest that there is no toxicity to be expected when sila-ibuprofen is used in vivo. Further in vivo studies are required to understand the pharmacological effects of sila-ibuprofen.