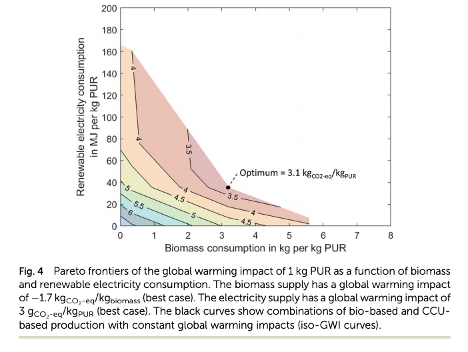 Title: Renewable carbon feedstock for polymers: environmental benefits from synergistic use of biomass and CO2

Polyurethane is a polymer that’s commonly used to produce foams and hard plastics. Polyurethane, like many plastics, is made from side products of fossil fuels including oil and coal. As the world moves towards more renewable energy sources, alternative sources need to be found to produce polyurethane and other polymers.

The authors note that while combining carbon dioxide and biomass feedstocks can lower the emissions of making polyurethane, there are other environmental parameters that can be harmed by the combination. Both processes increase the use of metals and other minerals as well as the presence of air pollutants that can be damaging to human health (Figure 2). Additionally, both methods release more acid into local land and water than using fossil fuel starting materials do. The authors note that these parameters must be considered alongside the carbon-emissions reduction when evaluating the best production methods for polyurethane.

Finally, the authors note that the starting materials used for polyurethane synthesis are also common in the production of many other polymers and chemical products. Future work could focus on the emissions and environmental impact of performing these processes starting from biomass or carbon dioxide feedstocks as well as examining how multiple processes starting from those materials might affect the practical and environmental issues involved in polymer synthesis.