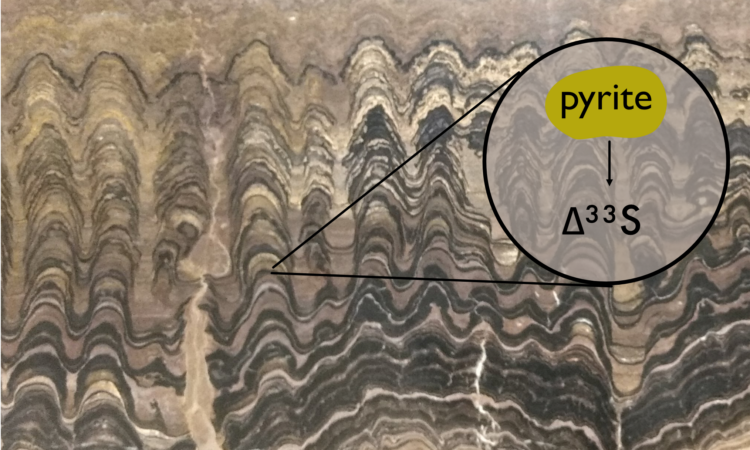 Decades ago, Earth historians discovered that the atmosphere hasn’t always been filled with oxygen. In fact, for the first half of Earth’s history, there was no oxygen at all. Then, almost 2.5 billion years ago, oxygen appeared suddenly in a dramatic period geologists call the Great Oxidation Event (GOE). From this moment on, oxygen has been a permanent resident in our atmosphere. Often referred to as the most significant geochemical event in history, determining the timing and tempo of the GOE has been a top priority for geologists. The GOE was first identified by looking at reactive minerals in ancient rocks that would not have formed in an oxygenated atmosphere. This gave geologists irrefutable evidence of the GOE but did not reveal a precise timeline. Then, in 2000, they identified an isotopic signature in sulfur-containing minerals (Δ33S) that only appears under non-oxygenated atmospheres. These minerals, called pyrite, can form whether the Earth is oxygenated or not; however, the Δ33S signal only occurs when the atmosphere is anoxic. Persevered throughout Earth history, pyrite acts as a record of Earth’s atmospheric composition.

By surveying the rocks with ages between 1 and 3.5 billion years, they found that the Δ33S signal disappeared around 2.4 billion years ago (Figure 1). The Δ33S disappearance age became the widely accepted timing of the GOE, until recently when a new hypothesis arose claiming that the GOE happened over a 100 million years earlier. Now, Izon et al. seek to reconcile this debate. In their study, they returned to the Δ33S signals from a sequence of South African rocks that spans across the GOE and independently confirm what was first shown over two decades ago, enhancing the theory with newly developed techniques.

To clarify the Δ33S disappearance date, Izon et al. used a new technique known as secondary ion mass spectrometry (SIMS). Previously, scientists crushed entire rocks and analyzed their Δ33S values, losing any spatial heterogeneity that may be present in the rocks’ minerals. However, with SIMS, individual mineral grains can be spatially mapped for their chemical properties. SIMS shoots a tiny laser that burns very small (10-6 meter) holes in the mineral grains. Izon et al. harnessed this technique to map the Δ33S across individual grains of pyrite (Figure 2).

These analyses revealed complex Δ33S dynamics. The range of Δ33S values within a single grain of pyrite from before the GOE was equivalent to the range of values measured from bulk rocks across all of Earth history. Thus, the formation of those grains had unexplained complexities that led to both high and low (near zero) Δ33S values. The authors hypothesized that before the GOE there were two sources of sulfur that could form pyrite (made of FeS2): polysulfide and H2S. While polysulfide comes from the atmosphere, H2S is formed in sediments under the ocean floor. Thus, the presence or absence of oxygen would only influence pyrite formed from polysulfide. Izon et al. suggest that the regions of pyrite grains with high  Δ33S values were formed from polysulfide while those with near-zero Δ33S values were formed from H2S. They conclude that the location of pyrite formation influences the bulk Δ33S of the rock, something that had not been considered previously. To verify whether this new complexity changed the original date of GOE, they analyzed pyrite grains from after the GOE. In these samples, they found no spatial heterogeneities within the mineral. The entire grain had near-zero Δ33S values. The only way to preserve spatial Δ33S heterogeneity is to form pyrite under an anoxic atmosphere, consistent with the hypothesis put forth over twenty years ago and supporting the timing of the GOE as 2.4 billion years ago.

In this study, Izon et al. returned to an important geochemical signature that was recently questioned, applying modern techniques to make detailed Δ33S measurements within mineral grains. These studies serve as independent constraint to support the use of Δ33S as a signal of the GOE. When studying Earth history, scientists are commonly data limited, relying on small datasets of rocks from different continents to tell one story about how the Earth’s surface has changed. As a result, Earth historians often come to different conclusions about the same results. To settle these debates, new analytical methods are developed, used and improved. The timing of the GOE is a hotly debated subject, and without this scientific back-and-forth, we could be left with conclusions that are inaccurate or incomplete. Izon et al.’s work is just another step in the direction of understanding our planet’s unique story.