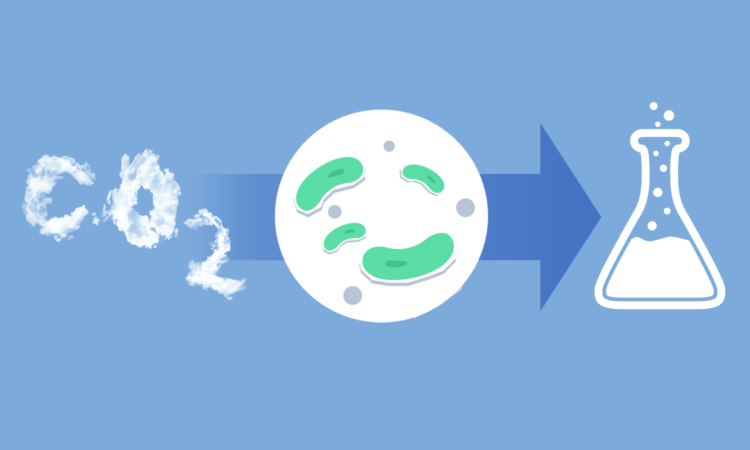 Climate change is undeniably one of the most pressing issues facing humanity. It is largely caused by the release of greenhouse gases (GHGs), such as carbon dioxide, into earth’s atmosphere. These gases trap solar energy and prevent heat from dissipating outward toward space, warming our planet.

The most effective way to combat climate change is to reduce our GHG emissions. However, additional strategies that remove existing GHGs from the atmosphere are certainly still needed. Scientists and engineers are getting involved in the latter effort by developing “carbon capture” methods which sequester GHGs and store or repurpose them for alternative use.

One new carbon capture method was recently reported by a research group at Northwestern University in the scientific journal Nature Biotechnology. In the paper, the researchers engineer microbes to convert carbon dioxide and other waste gases into useful commodity chemicals like rubbing alcohol (isopropanol) and nail polish remover (acetone). They then show the utility of their carbon capture method in making these chemicals by producing them on a large scale at an industrial pilot plant.

At a 120 L pilot plant, the newly engineered microbes made around 160 mL of acetone or 135 mL isopropanol per hour from carbon dioxide. That’s just under a standard bottle of nail polish remover you buy at the drugstore, which is 177 mL.

So how exactly did these researchers take a naturally occurring microbe and engineer it to make useful commodity chemicals while capturing carbon from the atmosphere? Let’s take a closer look.

In a biosynthetic pathway, each enzyme does a specific job to bring a starting material (in this case, carbon dioxide) one step closer to a final chemical product—much like individual machines on an assembly line. In the first optimization step, researchers took a naturally occurring microbe called Clostridium autoethanogenum (C. auto for short) and converted its biosynthetic pathway for ethanol to one for acetone or isopropanol.

To find the right enzymes for the job, the researchers searched a database of known alcohol and acetate producing bacterial strains to identify several candidates. Then, they tested different combinations of each enzyme in C. auto to find specific ones that could generate acetone or, with sAdh added, isopropanol. They successfully observed acetone or isopropanol formation with several combinations, the top 5 of which were moved into optimization step two.

Having formed acetone and isopropanol with an optimal biosynthetic pathway, the next task was to increase product yield. C. auto has other naturally occurring enzymes that could convert acetone into unwanted byproducts. Therefore, to increase the total yield of acetone or isopropanol, scientists needed to eliminate these byproduct enzymes.

To further improve yield, the researchers next investigated the rate of acetone production in the new strain by analyzing expression levels of the biosynthetic proteins needed for acetone biosynthesis (Thl, CftA/B, and Adc). They found that CtfA/B were not expressed as much as ThlA and Adc, and confirmed through kinetic modeling experiments that this under-expression affected acetone production yields. To fix this, they expressed more of the CtfA/B variant in a final C. auto knockout strain, increasing acetone and isopropanol production by >40%. Satisfied with this yield, the researchers moved on to optimizing the mechanical process for making these chemicals through carbon dioxide gas fermentation.

Specifically, the researchers tested if their engineered strain of C. auto could continually produce acetone or isopropanol over a prolonged period. In small-scale, 2 L gas fermenter, the engineered microbe generated 2.5 grams/liter/hour (g/L/h) of acetone with almost 80% selectivity; with sAdh present, it made isopropanol at 3 g/L/h at ~85% selectivity. Continuous gas fermentation was run for three weeks without a significant decline in production.

Encouraged by these results, gas fermentation reactions were scaled up 60-fold to a 120 L pilot plant (Figure 2). At this large scale, the researchers observed a slight decrease in yield and selectivity: the engineered microbe generated acetone at ~2 g/L/h at 65% selectivity, or isopropanol at ~1.5 g/L/h at 75% selectivity. This slight decrease was expected, however, due to the use of lower quality chemical reagents required for mass production and the slightly increased atmospheric pressure of the pilot plant. Still, the engineered microbe maintained satisfactory acetone and isopropanol production at an industrial scale.

As a final step, the researchers measured the GHG emissions for their fermentation process. Unlike traditional methods for acetone and isopropanol synthesis, which require cracking and reforming fossil fuels, their biosynthetic process had negative carbon emissions. Specifically, their microbes consumed 1.79kg CO2 per kg of acetone it produced, and 1.17kg CO2 per kg of isopropanol. In contrast, traditional acetone and production methods generate 2.55kg and 1.85kg CO2 for each kg of acetone and isopropanol made, respectively. The GHG assessment clearly indicated that these engineered microbes capture carbon dioxide from the atmosphere to make commodity chemicals.

This paper demonstrated a novel example of sustainable, scaled-up biomanufacturing, where living microbes make useful chemicals by repurposing GHGs. There is certainly much to be done in the fight against climate change, but novel technologies like these, which capture carbon and recycle it for other industrial uses, can bring us one step closer toward a carbon neutral world—prolonging the livelihoods of humanity and all other species that depend on this planet as their home.

Bree Iskandar is a pharmaceutical sciences Ph.D. candidate at the University of North Carolina at Chapel Hill. She is Content Editor of UNC’s graduate student science blog, The Pipettepen, and is passionate about making and communicating scientific discoveries. Find her at breezyscience.com or follow her on Twitter @breezyscience.