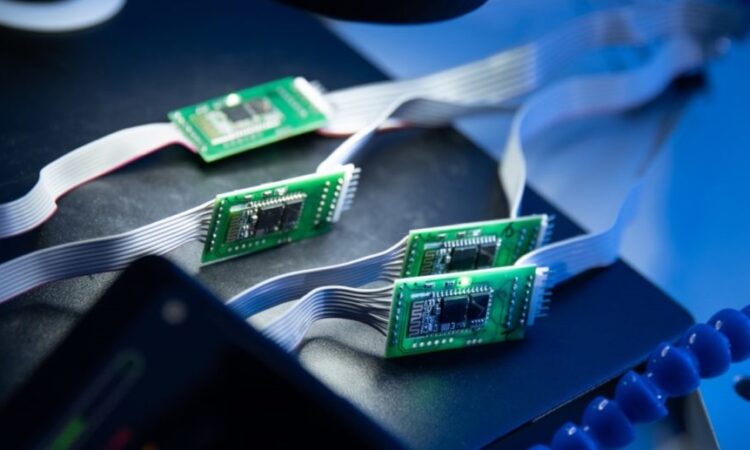 Visiting your family doctor for a yearly check-up is a general practice that has been adopted worldwide to prevent illnesses and improve our health. However, getting an appointment can sometimes be tedious and most of the time you end up on a waiting list. Furthermore, medical diagnoses are usually vague, commonly taking a healthy human model as a reference, which turns out to be a general approximation that does not consider the individual characteristics of the patient. Thus, there is an increasing demand for personalized medicine.

Wearable biosensors have gathered significant attention as optimal technologies for tailored diagnostics and therapeutics. The way in which biosensors and personalized medicine work are analogous to a weather monitoring station. To monitor and predict the weather, we need a robust device that can sense and acquire data on temperature, humidity, wind, etc., at an accurate level and sometimes under harsh conditions. Once a computer processes the data, we can obtain the prediction of the weather for the next couple of weeks/months. This model also tells us if we could be doing anything to prevent a predicted environmental outcome such as global warming. Under the same principle, a wearable biosensor has to gather data in different environmental conditions (e.g. sweat, varying pH, physical strain), which can then be used to predict diseases and provide tailored medical feedback to mitigate those potential outcomes.

These sensors must be soft, stretchable, and thin so they can be worn on top of our skin and sample physiological signals in a non-invasive fashion. Therefore, due to their reduced size, many of these devices rely on the use of nanomaterials as the active components of the sensor. Notably, nanomaterial-based biosensors have been able to successfully monitor chemicals found in sweat including metabolites, drugs, and hormones. A particularly useful kind of nanomaterial is the plasmonic type because it can enhance the signal of certain measurements that are used to analyze the concentration of chemicals with physiological origin.

Plasmonic nanomaterials can enhance the detected signal of biomarkers due to the presence of surface plasmons. This property of some materials arises due to the collective oscillation of electrons (the plasmons) on the surface of the nanomaterial. You can think of surface plasmons as buoys on the ocean oscillating at a constant frequency with the waves. These plasmons have a specific oscillation frequency depending on the material nature, size, and morphology. Changing these material properties would be analogous to varying the wind, generating another wave frequency. Hence, the frequency of electron oscillation in plasmonic materials can be manipulated by changing the physical parameters of the nanomaterial. In this way, the oscillation can be tuned to match that of the laser used to quantify the concentration of biomarkers, bolstering the signal measured.

But how does the signal increase in this way? Let’s walk through the measurement. First, a Raman spectrometer shines a laser on the sample. The sample then couples to the frequency of the laser, giving off a detectable signal. A useful analogy to understand this measurement would be to imagine a person (the laser) jumping on a trampoline (the sample). When the person jumps on the trampoline, it will ‘couple’ to it and get propelled upwards. A camera on the ground would be able to detect the height increase of the person at its peak. So what happens if a plasmonic material is present? In this case, this would be analogous to placing multiple people around the trampoline for a double-bounce trampoline jump, such that the person ‘couples’ to the other people (the surface plasmons). This will evidently increase the final height detected by the camera on the ground. In this way, plasmons effectively enhance the signal measured by a Raman spectrometer.

To take advantage of the beneficial properties of plasmonic nanomaterials in sensing, Mogera and co-workers designed a wearable paper-based microfluidic detection system. This device was engineered to capture sweat and quantify parameters including sweat rate and the biomarker uric acid, which is related to cardiovascular and kidney diseases and type 2 diabetes.

The paperfluidic device is shown in Figures 1A, B, C, and D. Its spiral design renders the system flexible to movement while increasing the surface area for optimal sensing. The top layer comprises an encapsulation film to isolate the system from external interferences. Then, the plasmonic paper contains gold nanorods, which can be observed under the electron microscope in Figure 1E. These nanorods are known to have strong surface plasmons that can enhance the signal of the measurement. The following layer contains the paperfluidic that acts as a carrier for the sweat. Finally, there is a laser blocker to protect the skin from the measurement and an adhesive to bind the device to the skin.

The measurement detects uric acid as it passes through the plasmonic paper sections of the device. This is done by shining a laser from a portable Raman Spectroscopy apparatus and identifying the signal for the biomarker. The more acid there is, the greater the signal detected. Notably, the top layer of the system is made out of polydimethylsiloxane, which also has a detectable signal though, in another region of the spectrum. Therefore, this layer can serve as a reference or internal standard for the measurement since the concentration of this layer does not vary. This makes the quantification of the uric acid less prone to external interferences such as other non-targeted biomarkers.

To test the efficiency and enhancement of the measurement due to the gold nanorods, a measurement of the same concentration of uric acid was conducted on two paper samples, one containing the nanorods and one without them. Figure 2A shows the results of this experiment. The signal enhancement provided by the gold nanorods is evident, being able to resolve several peaks that were not observed in the paper alone. It was also determined that the signal intensity increases linearly with increasing concentrations of uric acid. Indeed, the device can not only detect the presence of uric acid, but it can do so in a biologically relevant concentration regime (1-100 μM, Figure 2B and C).

The practicality and accuracy of the device were tested on a healthy human subject that ran for 20 minutes with the sensor attached to their forearm (Figure 3). There was no discomfort or irritation reported throughout the measurement. The group of researchers determined a concentration of 28 μM for uric acid, which is in line with the uric acid concentrations reported for healthy individuals. The device also withstands several stretching and twisting tests (Figure 4), with no significant effects to the sensing capabilities, proving adequate for on-skin usage.

The engineered device is an elegant demonstration of the usage of nanomaterials for real-life applications. It demonstrates how robust and advantageous the use of plasmonic materials can be when employed in sensing technologies. This wearable plasmonic sensor was able to detect relevant concentrations of a biomarker under challenging conditions and without the need for calibration. Future directions include the design of wearable electronics with targeted recognition for an array of relevant biomarkers that can allow the early detection of illnesses. This will streamline tailored diagnosis and therapeutic technologies into the personalized medicine market.