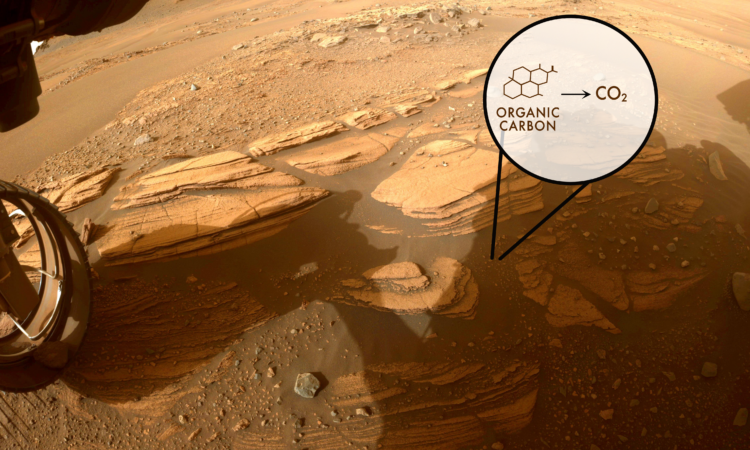 Last week, the Mars 2020 rover collected its first samples of sedimentary rocks from Mars. In the coming decades, those rocks will return to Earth and used to solve the mysteries of Mars’s past. However, the infrastructure for sample return will cost billions of dollars to fund. So, what assurances do we have that these rocks will tell us anything? This is the mission of the Curiosity Rover, which landed on the red planet over ten years ago and is still operational. In the most recent study from the Curiosity team at NASA, they demonstrate that Martian rocks hold a large reservoir of organic carbon for scientists on Earth to study.

Organic carbon is like gold for astrobiologists. The form of carbon required for life as we know it, organic carbon can be trapped in minerals and protected from decomposition. It is found in rocks almost as old as the Earth itself. Evidence based on the composition of these ancient organics suggests that life on Earth is over 3.5 billion years old. NASA scientists have been searching for organic carbon on Mars so they can do similar analyses and understand whether life on Mars ever existed. However, like gold, organic carbon must be painfully sifted from the rocks it is trapped within. When sifting for gold, a circular pan with a solid bottom is used to collect river sediments suspended in water. The gold nuggets are dense and sink to the bottom of the pan while the other minerals are tossed away with the water. Thus, gold is separated by density. Organic carbon on Mars is similarly separated by combustion. Minerals trapping the organics can withstand high temperatures without decomposing, but in the presence of a little oxygen, the organic carbon will turn into carbon dioxide gas. This CO2 then separates from the rock and can be quantified.

In this study, Stern et al. used the combustion technique inside the Curiosity rover to quantify organic carbon in Martian sedimentary rocks that were 3.5 billion years old. The samples were taken from the Cumberland Drill Site at Yellowknife Bay near the Curiosity landing site (Figure 1). Like rocks on Earth, they found appreciable concentrations of organics. However, they had one setback confusing their results. Years ago, a chemical called MTBSTFA leaked out of its compartment within the rover and contaminated the scientific instruments. Because MTBSTFA is an organic molecule, it could easily be confused for indigenous Martian organics. To account for this contamination, the authors took a measurement of the rover’s background organic carbon concentration through two stages:

Stage 1: Combust a sample at 550°C to quantifying its organic carbon content.
Stage 2: Leave the sample overnight inside the Curiosity rover, then combust it again at 550°C.

Stage 1 represents a combination of MTBSTFA background and the Martian organics. Leaving it overnight gives time for the MTBSTFA in Curiosity to contaminate the sample again, this time on a rock that already had its organics removed. Thus, in Stage 2, the combusted organics only represent the MTBSTFA background. By subtracting Stage 2 measurements from Stage 1 measurements, they determined the true concentration of Martian organics in the rocks. Finally, in two additional stages (Stages 3 and 4), they exposed the rocks to extremely high temperatures (860°C) and quantified any “refractory” organic carbon that is tightly bound to minerals or chemically more difficult to combust.

Stern et al. found high abundances of indigenous Martian organic carbon. The rocks were composed of over 0.07% organic carbon, plenty for scientists on Earth to study. Despite billions of years of harsh conditions on the surface of Mars, these organic molecules survived and potentially tell a story about how they were formed. These samples are estimated to be 3.5 billion years old, representing a time in Martian history known as the Noachian, when it is believed the surface of Mars contained flowing rivers, lakes, and perhaps even oceans. Now, the Mars 2020 mission is taking samples of similar sedimentary rocks which may also contain organic carbon. If so, scientists will analyze its composition more thoroughly with technologies here on Earth. These results will hopefully tell us a story about whether Mars was once not only a habitable planet but an inhabited one as well.