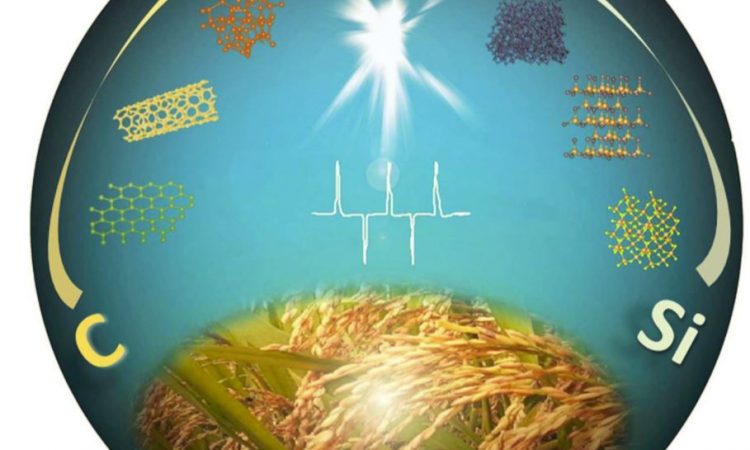 Similar to corn, rice has an inedible husk that is discarded during food processing. The husks may not seem exceptionally useful at first, but rice husks have been used for many years as filler ingredients for soil amendment and construction materials or burned for energy generation. Yet most rice husk (RH) today is either wastefully burned or discarded into landfills because there is simply far too much to make use of. That is a whole lot of waste considering that the yearly production of rice husk is over 160 million tons (that’s the weight equivalent of nearly 500 Empire State Buildings a year!). Instead of further wasting this promising biosource, researchers are investigating the conversion of rice husk into structures that could be used in our everyday lives to build materials like batteries, supercapacitors, and solar cells.

Rice husk is versatile as a material precursor because it is composed of a matrix of organic (carbon) compounds and inorganic silica (Figure 1, top right). Since carbon and silicon materials are everywhere in modern-day society, rice husks provide a strong platform for creating interesting downstream products. The authors of this publication present multiple methods and applications for re-purposing rice husks for nanotechnology.

The first major type of RH-derived materials are the carbon-based structures, which include porous carbon, carbon nanotubes, and graphene. By converting organic components of RHs, such as lignin, hemicellulose, and cellulose into simpler compounds, and removing the silica, RHs can be converted into porous carbon structures (Figure 1). Activation methods such as acid treatment can then be used to increase the surface area of the porous carbon materials to prepare them for desired applications. One such application of porous carbon structures is supercapacitor electrode materials, where researchers have shown that RH-derived porous carbon has superior supercapacitor performance compared to commercially available carbon sources. Using high-energy methods such as combustion and microwave plasma irradiation, it is also possible to create graphene and carbon nanotubes from rice husks. Since the applications of graphene and carbon nanotubes are nearly endless, ranging from medicine and environmental to energy and electronics, the ability to create these types of structures from recycled biomass is very exciting.

Rice husks are also an excellent source of silica (SiO2). Silica itself is an attractive molecule for forming catalyst supports and absorbent materials, such as those used in cat litter. The unique structural details of RHs makes them an ideal raw material to form silica nanostructures because the silica is of high purity and very porous. Through chemical reduction (removal of the oxygen), these can also be converted into pure silicon (Figure 2), which is vital for many important technologies, primarily in the electronic industry. The researchers here convey promising examples of RH-derived silicon for the formation of lithium ion battery anodes and solar cells.

Since most biomasses have similar chemical compositions, the research on rice husk conversion motivates material research into other biomass sources, including wheat husk, bamboo, and cotton, among others. Although a promising nanomaterial feedstock, a few problems still need to be addressed. These include methods to precisely control the size and shape of the structures that are generated from RHs and optimized processing steps that can bring the expenses down to compete with methods used today in industrial settings. In other words, these methods need to be more accurate and less expensive. In all, this collection of research shows the strong potential for biomass such as rice husk to be converted into carbon and silicon nanomaterials that are useful for a wide range of applications.

Want to learn more? Read the details in the original paper.

The cover photo is sourced from the original article, with the permission of Wiley-VCH.