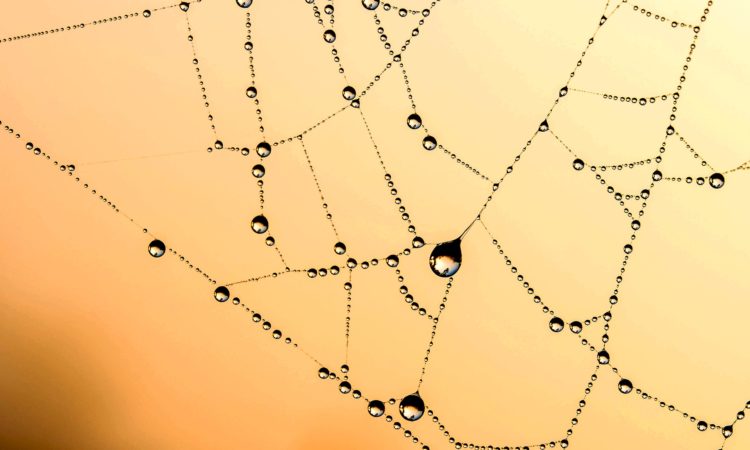 Humans have always looked to nature for inspiration to solve complicated problems, since the natural world has had millions of years to evolve elegant solutions. Bioinspired materials range from airplanes’ bird-like wings to Velcro designed specifically to replicate the way bur seeds hook into fur. Now, researchers from Donghua University in China are using biologically inspired materials to address a very unnatural issue: air pollution.

A major component of air pollution is particulate matter, tiny specks of solid or liquid material that are small enough to stay suspended in the air. Usually, these particles are smaller than ten microns wide, nearly ten times smaller than the width of a hair. Much of the world’s pollution comes from the burning of carbon-based fuels, which release these microscopic bits of un-burned carbon in the form of smoke or smog.

One of the best ways to remove these tiny particles is by using filters, which trap the particulate matter inside of a network of fibers. Unfortunately, these filters are often too thick to let much air flow through them and can be heavy and difficult to install. To solve this, researchers have mimicked something nature already uses to trap small objects: spiderwebs.

In this research, scientists have developed a way of making spiderweb-like filters (named ULTRA NET filters) that are strong, thin, lightweight, and even see-through. They started by dissolving two types of polymers, PMIA and polyurethane, in a solvent. The two polymers’ different chemical structures give them different physical properties; the PMIA is rigid, while polyurethane is flexible. By mixing the two, the final material is both bendable (because of the polyurethane) and hard to break (because of the PMIA).

The filter is made using a technique known as “electronetting,” where electricity is used to charge the polymer-containing liquid and attract it towards a layer of fabric (Figure 1A). This process, which is like electrospinning, causes the liquid to form thin streams and droplets, which are flattened against the fabric, forming a network of strands with films of liquid between them.

When this liquid is exposed to air, the solvent in this film starts to evaporate, leaving behind an even smaller web of solid polymer connecting the larger strands, which can then be peeled off of the fabric backing (Figure 1B). By controlling the mixture of polymers, the distance between the liquid and the surface, and the electrical settings, different sizes of webs can be formed, with holes smaller than a single micron (Figure 1C).

After this complex process, the researchers were left with a thin, flexible sheet of material that could easily be handled (Figure 2A). Before testing how well it trapped pollutants, they first needed to test how strong it was. They mounted the filter over an opening and forced air through it at speeds over 20 miles per hour. It easily stretched and bent, letting the air through without any breaking (Figure 2B). Only by stretching the material by over 25% did they start to see breaking of the small network, with whole filter only breaking after stretching 55% (Figure 2C).

Next, the scientists needed to see how well their new filter could remove particulate matter. They tested three different sizes of particles (2.5, 1, and 0.3 micron) and three different types of material (cigarette smoke, salt crystals, and oil droplets). For the smoke, all the different polymer formulations worked well, with the most effective mixture removing over 95% of both the 2.5 micron and 1 micron particles, and over 65% of the 0.3 micron particles (Figure 3A). The filters also did not block the flow of air very much, leading to a very small drop in pressure. The salt crystals and oil droplets were also removed easily, with a denser filter removing them more effectively (Figure 3B).

Finally, the filter was tested to see how well it might behave in a real-world application. Ideally, the filter would be transparent, letting it be installed in a wide variety of places. When the filter was very thin, over 96% of the light that hit it passed through, making it even more transparent than window glass (Figure 3C). They also simulated how well the filter could block out more “biological” pollutants (such as sneezes) by spraying a bacteria-filled mist through both a commercially-available filter and one made using this method. After letting the cultures grow, it was clear that this new filter kept out more bacteria (Figure 3D).

The researchers who developed these filters said that their inspiration came partially from seeing dusty cobwebs outside; if a spider can build a dust-catching net with biology, why couldn’t they do it even better with chemistry? These filters could one day be used any number of applications to keep out unwanted particulate, such as scientific cleanrooms, engines, or even window screens. So, the next time you see a friendly spider, maybe give it a silent thanks for cleaning up the air, even if you do it from a distance.