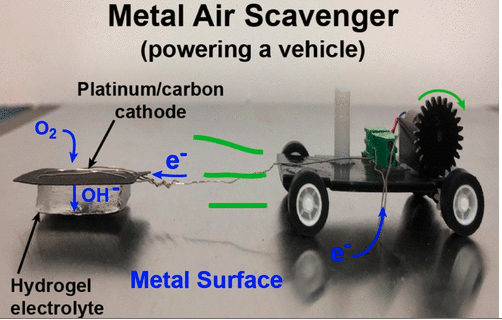 Modern robots, from Roombas to Mars rovers, are revolutionizing modern life. But robot design can be limited by the need to include a power source for the robot. For very small robots, technologies like lithium ion batteries can become prohibitively heavy while only providing a short duration of power. To overcome the limitations of traditional energy storage in small robots, the authors of a recent paper in ACS Energy Letters demonstrate a novel strategy that scavenges energy from a metal surface to power a small vehicle.

Instead, the authors propose a metal-air scavenger, which consists of a cathode (electrode where reduction occurs) that can produce hydroxide ions and a metal anode (electrode where oxidation occurs), which can be oxidized by the hydroxide ions. As the device travels across a metal surface, the hydroxide ions produced by the cathode can oxidize the metal surface, providing the robot with electricity. Attached to the cathode is an electrolyte made of a hydrogel, which consists of a 3D network of long polymer chains that can absorb and store water. The electrolyte connects the cathode towed by the robot to the metal surface serving as the anode.

The advantage of the metal-air scavenger system is that it allows the robot to extract energy from anywhere on the metal surface without having to carry a source of energy on board the robot. The authors demonstrate that the metal-air scavenger can generate relatively high power densities on aluminum and zinc surfaces and lower power densities on stainless-steel surfaces. As the amount of current generated by the device relies on the oxidation of the metal, the device is more or less efficient depending on the metal’s reduction potential. Although oxidation of the metal by the electrode reduces the amount of energy available to the robot on a second pass, the authors report that the metal-air scavenger can still extract energy from oxidized metal surfaces.