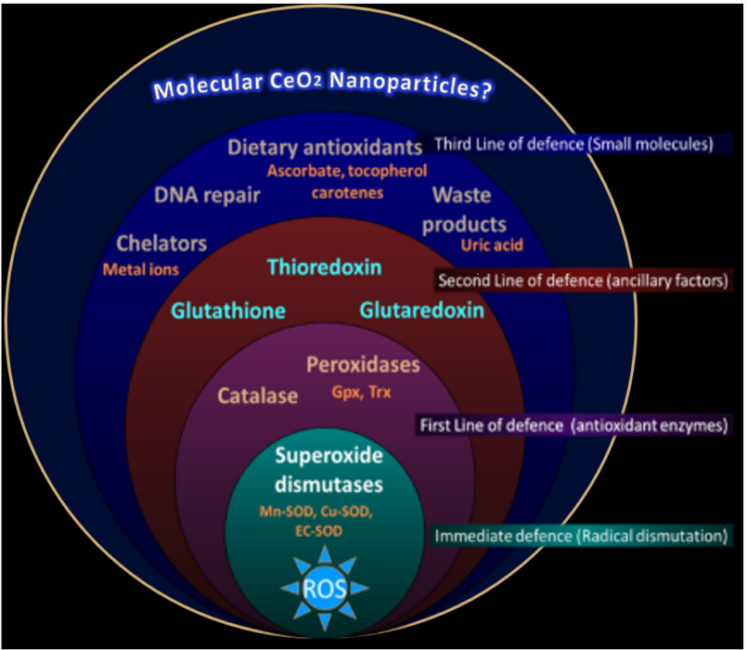 Title: Expansion of the Family of Molecular Nanoparticles of Cerium Dioxide and Their Catalytic Scavenging of Hydroxyl Radicals

Oxygen is the fuel that maintains human life—we wouldn’t exist without it. But there exists an ominous side to oxygen. One prominent stressor on human health comes in the form of the reactive oxygen species (ROS), including superoxide (O2–), hydrogen peroxide (H2O2), and hydroxyl radical (·OH). If left unchecked in the body, these compounds can wreak havoc, ultimately leading to cell death and the onset of various detrimental diseases (cancers, neurodegenerative diseases, etc.). Thanks to the intelligent design of Mother Nature, humans are equipped with an antioxidant defense system in the form of metalloenzymes, such as superoxide dismutase and catalase, which rapidly convert ROS into less reactive compounds via redox involving ions of various transition metals (such as Fe, Ni, Cu, Zn) found in the active sites. On occasion, however, our defenses are insufficient to deal with an excessive ROS population.

Cerium dioxide (ceria) carries a reputation as an incredibly versatile metal oxide, largely relying on the unique ability of cerium (among the lanthanides) to readily cycle between Ce3+/4+oxidation states. To maintain charge balance in response to these redox events, the metal oxide may lose or gain oxygen ions. These properties drive intrigue in ceria as a catalyst, co-catalyst, and support material, spurring its candidacy in various emerging technologies from clean energy generation through medicine. Presently, researchers are pushing the development of ceria nanoparticles (CNPs, nanoceria) as a clinical antioxidant to remove the threat of ROS.

These attempts have been immensely successful, as many have reported CNPs to be highly active under mild conditions, a consequence of the nanoparticles’ increased surface area and Ce3+content. In fact, experiments have shown that nanoceria may be a more efficient radical scavenger than our naturally-occurring enzymes—very rarely can a synthetic product claim to outperform nature’s solution. However, there remains debate over how to control this reactivity by tuning variables such as nanoparticle size, shape, surface composition, and Ce3+/4+ ratio.

A family of cerium-oxo clusters, identified as molecular ceria nanoparticles, has been established (Figure 1) to develop this knowledge. Because of their molecular nature, these clusters may be isolated as single crystals using simple crystallization methods and analyzed by several complementary solid-state and solution-based techniques. Excitingly, the crystals can be examined by X-ray diffraction, revealing their precise structures. This technique confirms that each molecule contains a central cerium-oxo core, with cerium and oxygen arrangements identical to that of ceria, hence the term molecular ceria nanoparticle. This diverse family of clusters, the largest of which contains 40 cerium ions, represents an ideal opportunity to investigate how variables such as size, shape, and Ce3+/4+ ratios impact hydroxyl radical scavenging.

Electron paramagnetic resonance (EPR) spectroscopy, a common method for the study of radical species, was used to follow the generation and elimination of hydroxyl radicals via spin-trapping (Figure 2).  In this, hydroxyl radicals are generated in the presence of DMPO, a common spin-trapping agent, which interacts with the generated radicals leading to the DMPO/·OH adduct. This complex can be identified by its familiar four-line signal with peak intensities of 1:2:2:1. In the presence of the radical scavenger, or a molecular ceria nanoparticle in this instance, this signal is expected to dissipate due to the diminishing population of hydroxyl radicals (Figure 2b). In fact, these compounds show a wide range of activities, from insignificant to very impressive (Figure 2c). The researchers, looking for a correlation between cluster features and catalytic activity, found that higher Ce3+ content corresponds to reduced activity, standing in contrast to many reports in the ceria nanoparticle literature.

Thus, yet another example to prove that Dr. Feynman, renowned physicist and the first recognized spokesperson for nanoscience, was correct—nanotechnology continues to see rapid growth (pun not intended) and shows great promise in our evolving world. The family of molecular ceria nanoparticles emphasizes a future for ultrasmall (< 10 nm) metal oxide nanomaterials, as a well-controlled model and a possible tool for clinical medicine with additional validation.

PhD candidate at the University of Florida investigating the synthesis and properties of metal-oxo clusters. Broadly interested in science outreach, advocacy, and the development of positive science policy. If I'm not in the fume hood, you'll find me training for my first marathon or supporting my beloved Philadelphia 76ers.