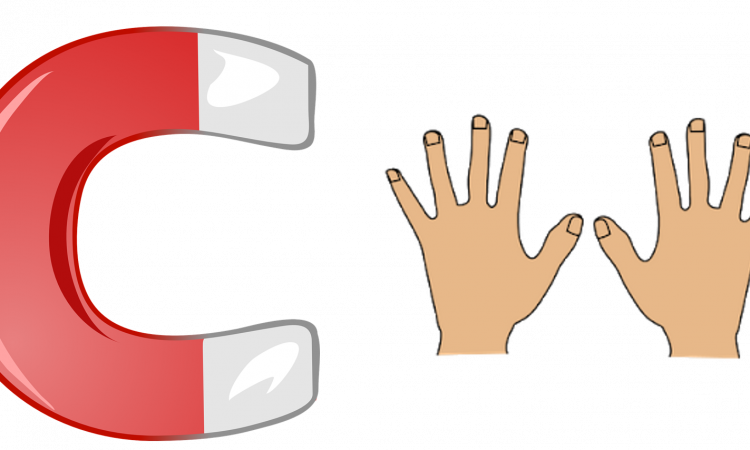 Some molecules cannot be superimposed on their mirror image – these are called chiral molecules. Your hands are chiral too – your left and right hands are non-superimposable mirror images. A pair of mirror image structures is known as a pair of enantiomers.

Cysteine, an amino acid, is a chiral molecule – the two forms D-cysteine and L-cysteine are non-superimposable mirror images.

How can you separate a mixture of two enantiomers? This question is of huge importance in chemistry, especially for the production of pharmaceuticals, polymers, biomolecules…the list goes on. This paper describes a remarkable new way of separating enantiomers – using a magnetic field.

The current methods we have for separating enantiomers directly rely on differences in the shape of the molecule. For example, chromatography using a chiral stationary phase causes the two enantiomers to separate, whilst reaction with another chiral molecule produces separable diastereomers. Alternatively, you could skip the trouble of separation by developing an enantioselective synthesis in which you only make one enantiomer – selectively – in the first place. However, a selective synthesis can be tricky to perfect and it is often far easier to separate enantiomers after the fact.

In this work, the authors rely on a slightly subtler molecular feature to separate the enantiomers: differences in their spin states. When electrons move through molecules, their motion depends on the intrinsic ‘spin’ of the electron – a quantum mechanical property. This effect has a name: Chiral Induced Spin Selectivity (CISS). This means that when electric charge is redistributed in a chiral molecule (e.g. by an induced electric dipole in the molecule) the spin states of the electrons depend on which enantiomer you have. These spins are capable of interacting with magnetic fields – just like nuclear spins do in NMR spectroscopy or electronic spins in EPR spectroscopy.

So how did the researchers take advantage of this effect? They synthesised two enantiomers of a peptide chain with a helical shape. The helix can be ‘left-handed’ or ‘right-handed’ and, like left and right hands, the two are mirror images or each other: enantiomers.

With the enantiomers ‘in-hand’ they exposed them to a magnetic film made of cobalt and covered in a thin layer of gold, which the helices can adsorb (stick) to. In this experiment they used enantiomerically pure helices but varied whether the dipole of the magnet was pointing ‘up’ or ‘down’. Examination of the peptides in an electron microscope revealed that the left-handed helices adsorbed more when the polarisation was ‘up’, whereas the right-handed helices adsorbed more when the magnetic dipole was ‘down’.

The effect was confirmed using circular dichroism (CD) spectroscopy, which reveals the interaction of molecules with polarised light – waves of light travelling in the same plane. Enantiomers can be distinguished by CD spectroscopy because different enantiomers interact differently with polarised light. When a racemic mixture (equal mixture of the left and right-handed helices) was exposed to 100 of the 1 cm x 1 cm magnetic films magnetised either ‘up’ or ‘down’, the CD spectra changed from showing a racemic mixture to spectra resembling one of the enantiomers. These results showed that the magnetic films are selectively adsorbing one enantiomer over the other, thereby purifying the racemic mixture.

To show that this technique is generalizable, the authors then demonstrated that the same ideas can be used for helices of DNA, and for a single amino acid, cysteine. They also scaled up their experiment and coated a flow column with magnetic film to show how one might use this setup in a research lab or industry setting to purify material. The researchers then used theoretical calculations to validate their hypothesis that adsorption selectivity is a result of CISS. Why not have a look through the paper for a more detailed description of these experiments?

This new technique using magnetic fields to separate enantiomers (or even just chiral molecules from achiral ones) could be extremely useful. Depending on what we find out the strength of the CISS effect for different molecules, this could be quite a general method for separating enantiomers. For the intrepid researcher, there is plenty of exploring to do in this space now, from modelling and understanding the nature of the CISS effect in different molecules to studying the kinetics of adsorption of the chiral molecules to surfaces in magnetic fields. Keep an eye on this interesting,