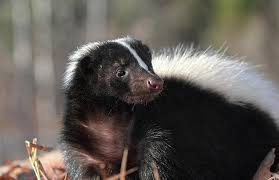 Unfortunately, these oily, smelly substances easily cling to clothing, hair, skin and fur so complete odor removal – aka “de-skunking” – is challenging, especially considering how well the human nose can detect low concentrations of thiols. In fact, if you want to know how well your lab hood works, open some essence of skunk inside of it.

Home remedies and store-bought items that claim to eliminate skunk odors often suffer from limited success or contain eye and skin irritants. In fact, a research team, led by Professor Robert Cichewisz of the University of Oklahoma, used LC-MS to show that 5 of 6 commercially-available de-skunking products did not chemically alter model compound 2-phenylethanethiol, one of many smelly thiols present in skunk spray.

Instead, Cichewisz thought a natural product-based alternative could be a better solution. The researchers previously isolated a molecule known as pericosine A from the fungi Tolypocladium. They knew pericosine A could protect fungi against antibiotics and toxics that are nucleophilic, which are molecules that have a tendency to donate electrons to other molecules or react at electron-poor areas of a compound. The researchers hypothesized that this electrophilic natural product, which has a tendency to attract or acquire electrons, and its synthetic analogues could react with nucleophilic thiols found in skunk spray to yield odorless products that could easily be removed from affected surfaces.

The authors reacted pericosine A with compounds 1 and 2, which are similar to those found in skunk spray, and determined that pericosine A reacted with thiols and thioesters under basic conditions. In fact, catalytic base Et3N could be used to significantly increase the rate of reaction, and the product distribution was also dependent upon the amounts of starting materials and reagents used.

After showing that pericosine A and structurally similar compounds could successfully eliminate thiol odors, the researchers substituted some of the original reagents with new components thought to be safer for topical applications. For example, the Et3N base was replaced with the naturally occurring base spermine, a component of eukaryotic cells that’s already incorporated into some existing cosmetic products.

With optimized conditions established, the researchers then reacted sulfur-containing compounds harvested from skunk secretions with pericosine A and its analogues. The research team smelt success – literally – as the smell from thiols in the skunk spray became much less pronounced throughout the lab. Analytical methods confirmed the formation of new, odorless products. Lastly, the researchers established that pericosine A was not toxic or irritating toward skin and eye tissues, opening the door for future research.

As a whole, this paper presents a straightforward, natural products-based approach to odor neutralization of sulfur-containing compounds. The researchers anticipate commercial applications for pericosine A and its analogues in the future.

https://sbsciencespeak.com/
I'm Stephanie, a graduate student at the University of Wisconsin-Madison. My research focuses on developing new chemical methods to make structurally complex carbohydrates, although my boss would probably argue I spend more time writing than doing research. I spent the 2019 summer working as a science writer for the Milwaukee Journal Sentinel, and I'm excited to highlight recent research for Chembites. In my free time, my daughter, husband and I enjoy crafting, playing volleyball, spending time in the woods, or trying the local ice cream shop's newest flavor.