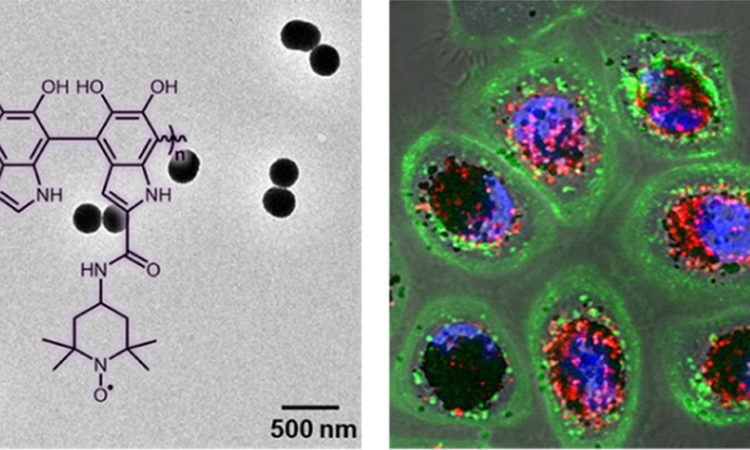 Melanin is a biological component that we are keenly aware of because of its visibility in the skin and hair. We know its presence can influence an individual’s likelihood of participating in science, either as a scientist or subject. Divorced from its societal implications, the chemical itself displays a fascinating array of properties and functions in the body which come as a consequence of its unique structure.

Each melanin pigment is a polymer-like molecule made up of subunits of the neurotransmitter dopamine and other similar molecules like L-DOPA, the dopamine precursor that is used to treat Parkinson’s disease (Figure 1). Melanin has a high amount of disorder, meaning no two melanin molecules are exactly the same. They may differ in how many subunits they contain, how they are connected, and how they are stacked. Additionally, there is not just one type of melanin. Instead, melanin is a larger category of pigments which consists of two main types: eumelanins, which are the source of black and brown color in the body, and pheomelanins, which give red hair its color. There’s even a variety present in the brain known as neuromelanin that offers protection to neurons –and which is diminished in individuals with Parkinson’s disease.

A key function of melanin is its ability to protect bodily tissue from damage by radicals, which are highly reactive and often short-lived molecules that contain unpaired electrons. Electrons most frequently exist in pairs, in the body and otherwise, but when they don’t, they can have drastic effects, both good and bad. Therefore, the body continuously tries to eliminate unintentional –or even intentionally formed –radicals before they can cause cellular damage.

A common form of radicals in the body are reactive oxygen species (ROS) which include peroxides and superoxides (O2–). The presence of both molecules can be curbed by protectant molecules like melanin and antioxidants. Unintentionally formed “external” radicals come from a number of sources, including ionizing radiation like sunlight and x-rays, as well as air pollutants and cigarette smoking. The body can also purposefully create “internal” radicals; for example, hydrogen peroxide is used for metabolic processes in the mitochondria and nitric oxide in the regulation of blood pressure.

Yet despite the damaging effect that radicals can have, melanin itself contains radicals. In fact, melanin production relies on the generation of radicals to form bonds, and when you shine ultraviolet and visible light on melanin it produces more radicals! This is not as haphazard as it seems because the radicals inside melanin are well-contained and act as traps for the outside radicals; when they combine, both are rendered harmless.

Researchers have sought to enhance the protective properties of melanin by making a synthetic melanin with increased radical content. Conveniently, unenhanced synthetic melanins already exist in the form of nanoparticles (Figure 2A) and are made with the same building blocks as natural melanins, including dopamine. So, Cao et. al. decided to modify a proportion of the building blocks in the nanoparticles so that they produced more radicals while still reacting to form larger nano-sized structures, resulting in so-called “radical NPs” (Figure 2B). The building blocks were modified to contain a well-known radical-containing molecule called TEMPO, which in other applications is used to detect radical-containing molecules.

The increased presence of radicals was detected by magnetometry, a technique used to measure the magnetic field produced by unpaired electrons. This increase in radical content was confirmed using electron paramagnetic resonance, or EPR spectroscopy. EPR spectroscopy is a specialized technique used to detect unpaired electrons and the molecular environments they exist in, and in fact, melanin was one of the first molecules in which radicals were detected using this technique.

Next, the researchers demonstrated the effect that the radical NPs could have in human skin. When the radical NPs were mixed with human skin cells, they were taken up by the cells and accumulated at the nucleus, where our radiation-sensitive DNA is stored (Figure 3A). This was a promising first sign that the radical NPs were acting like natural melanin, so next they tested if their presence would protect the cells from ionizing radiation. Cao et al. introduced a dye into the cells that fluoresced when exposed to ROS and irradiated the cells with ionizing X-ray light. Looking at cells under a microscope, they found that the fluorescence that appeared in the unprotected cells was absent in the radical NP treated cells (Figure 3B).

Enhanced melanin such as that found in these radical NPs synthesized by Cao et al. has the potential to act as a radioprotective material. Such materials are useful to protect from occupational hazards present at nuclear power plants and in the healthcare industry. This method may even eliminate the need for heavy lead jackets used during medical X-ray scans to avoid DNA-damaging ionizing radiation. Finally, the melanin-like design of these radical NPs makes them biocompatible, meaning they could be used to minimize the negative impacts of cancer treatment by protecting the non-cancerous parts of the body.