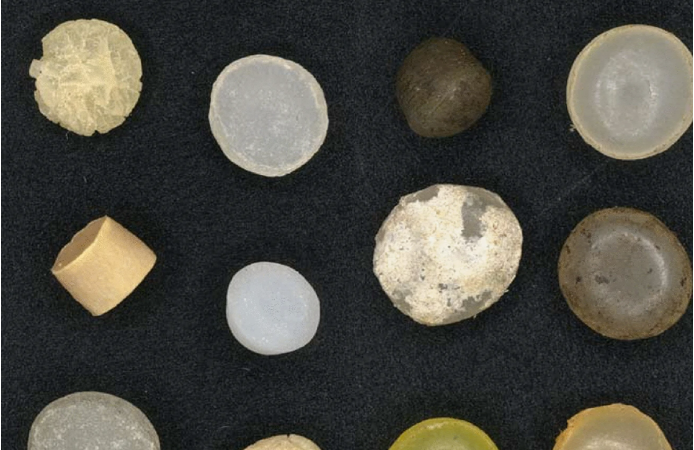 Title: In situ laboratory for plastic degradation in the Red Sea

Plastics are ubiquitous and essential for modern life, but they have become an international environmental hazard. Plastic waste through both littering and escaping weak points in waste streams has led to an estimated five trillion plastic pieces in the ocean. Still, much is unknown about the chemical fate of plastics because real-world weathering experiments are difficult. A group of researchers in Germany took advantage of a natural experiment that happened due to a shipwreck in the Red Sea. The SS Hamada foundered off the coast of Egypt in 1993, carrying a load of plastic pellets. Some of these pellets stayed contained by ship at 18 meters deep for the past 26 years (from 1993 to sample collection) while some washed to shore (Figure 1).

These researchers used this shipwreck and the fate of these plastics as a natural 20-plus-year weathering experiment. They hypothesized that the plastic particles that ended up on the beach degraded faster than the ones that remained in the wreck. The plastic pellets were primarily low-density polyethylene (LDPE). To investigate the weathering differences, they used a combination of Fourier-transform infrared spectroscopy (FTIR), particle size and shape distributions, color, mass loss, differential scanning calorimetry (DSC), gel permeation chromatography (GPC), and rheology. The differences in these measurements gave insight into physical and chemical changes that occurred in the plastic pellets across these two sites.

There were negligible differences in particle size and mass loss (0.57%) after 26 years. Also, the researchers were unable to get the beached plastic samples to dissolve in 1,2,4-trichlorobenzene for GPC to find the molecular weight of the beached plastic. However, FTIR (Figure 2) suggested that more weathering occurred in the beached samples as indicated by the presence of carbonyl groups (band between 1810–1550 cm–1) and oscillations in the fingerprint region of the spectrum (<1500 cm–1). The presence of a carbonyl group indicates an increased degree of chemical oxidation an important part of weathering. However,, this chemical change did not result in significant degradation as seen by a lack of mass loss.

The researchers hypothesize that this is due to a lack of chromophores (parts of molecules that absorb photons, resulting in excited electrons) in LDPE. Rheological testing also showed differences between the beached and wrecked plastic pieces. The wrecked plastic samples behaved like pristine LDPE, a viscous polymer. This is shown by a loss tangent consistently above one (ranging from 14 to just above 1 in a large frequency sweep), which indicates the sample is more viscous than elastic (behaves more like a viscous liquid than a solid). However, the beached samples have a loss tangent of less than one (ranging from close to 0 to just below 1 in a large frequency sweep) which indicates a more elastic behavior (solid-like behavior). The researchers indicate that this could be due to an increase in branching and cross-linking in the sample. This hypothesis of more cross-linking is strengthened by the fact that the sample would not dissolve for GPC. Although, the rheological properties of the beached samples may also suggest that chain scission co-occurred and the molecular weight of the chains was reduced. This is because of the shear thinning behavior (decrease in viscosity with an increase in frequency). All this information may seem conflicting but it goes to show how complicated the degradation of plastics is. In summary, the bulk plastic mass loss of the beached plastic was undetectable, however, molecular scale changes indicated by GPC and rheology show an increase in cross-linking and a decrease in the molecular weight of the polymer chains that make up the bulk plastic.

Any chain scission that occurred, the researchers attributed to photo-oxidation since the molecular weight of the chains was 100 times greater than the size needed for biodegradation to be a major contributor. The other significant factor of the beached plastic degradation was most likely mechanical forces from the sea (wind and waves). However, the timescales of significant decay for LDPE are much longer than 26 years.

While this study provides good insight into the long-term degradation of LDPE in the real-world, much is still unknown about the degradation mechanisms of LDPE and other plastics. Hopefully, information from this work and other similar studies in the future can be leveraged to elucidate the degradation of contemporary commodity plastics and create more rapidly degradable plastics of the future.