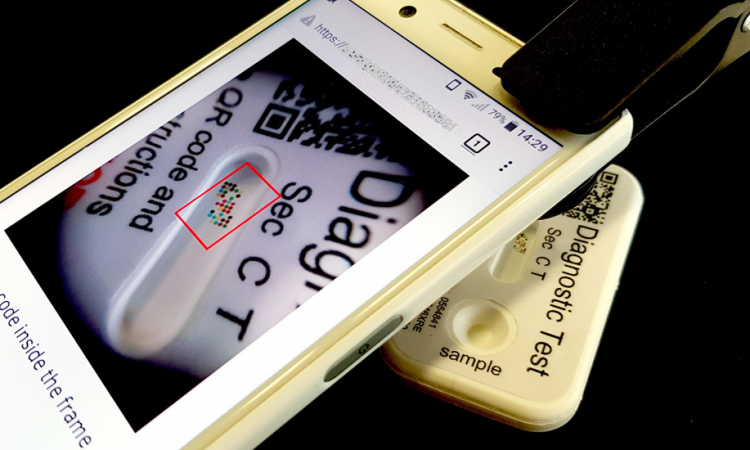 Building cheap and easy-to-use medical tests is important for improving the health of everyone in the world. Point-of-care medical devices (which can give test results at the same location as the patient) are small, inexpensive, and single-use, which lets medical workers quickly determine if someone is sick and start treatment immediately. Unfortunately, because this is a huge need in many countries (especially in the poorest areas), there are people looking to take advantage of this situation. These tests are often faked, reused, or even relabeled in order to sell them to desperate medical clinics. The World Health Organization has said that around 1 in 10 medical products in these poorer areas may be fake or unusable. In this article, researchers have developed a way to add identifying codes to these devices that are automatically erased after they have been used, making it impossible to fake or reuse them.

To accomplish this, the researchers used a method combining photolithography and inkjet printing. Photolithography uses light to pattern certain shapes on a surface, which are then removed by chemical etching. Specifically, they etched away the surface of a silicon wafer to form a series of tiny pillars, each only 20 microns high (Figure 1a). Then they printed little drops of dye solution on top of the pillars, leaving a bright color (Figure 1b). This is kind of like a Lite-Brite with its colorful pegs pushed into the board! The researchers wrote a computer program that can use a smartphone camera to scan these colorful codes (similar to a barcode) and make sure they match the devices’ manufacturing information. Adding other colors of dots means the amount of data they can encode is even larger. But so far, the things described here aren’t that different from what a barcode or QR code could do. What makes this technique special is that this code can be erased after the device is used. This is done by slightly changing the way the pillars are fabricated, so they are sealed inside tiny channels (Figure 2a,b). The code can be printed on the pillars in the same way, but now if water (or some water-based solution) is flowed through the device, the dyes are washed away (Figure 2c). Many point-of-care devices involve flowing some fluid (like blood or urine) through them; by putting this code in the flow path of sample being tested, using the test erases the code as well, making it clear that device has already been used and preventing repackaging. All of the devices described above are built on top of silicon wafers. But most disposable medical devices are made with a material called “nitrocellulose.” When it is cut into a strip, nitrocellulose can wick liquids along its length. That way, the solution that is being tested passes across parts of the material coated with chemicals that can detect other molecules. Usually, these chemicals change color so that the results of the test are visible (just like a disposable pregnancy test).

By printing dots of ink onto the nitrocellulose, the researchers can encode information about the test in the same way as the silicon wafer. But to add another level of information, special inks can be used that contain long polymers like polyethylene glycol (PEG) that don’t wash away, while inks with small molecules (like glycerol) are erased. Having dots with both types of ink means that after the test is used, only some of the dots will be erased, leaving the rest behind (Figure 3). Because the drops of ink that won’t be erased look the same as the drops that will wash away, it would be impossible to make fake devices that would have the same pattern after they are used!

The researchers also built complicated microfluidic devices (which control the flow of liquids using tiny channels) that can determine the order in which certain parts of the code is erased. This gives yet another level of complexity, allowing more information to be encoded. The way the code works is much more complicated than the other methods described in the article, using two layers of channels and one-way flow gates. But the takeaway is that this type of code can be used to track and verify hundreds of billions of individual devices. The article has some really great videos that show this in action, too, so be sure to check those out!

Because fake medical tests are such an insidious way to trick people who are already vulnerable, finding ways to fight them is of great importance. This new method for producing dynamic, complicated, and hard-to-reproduce codes is one great way to do this!